In 1924 Yanceyville students attended the new Bartlett Yancey School. The old Yanceyville Academy building for a while was used as a teacherage (boarding house for teachers) and at some time as overflow classrooms.

Based upon the 1930 United States Federal Census it appears that the building was used as a "teacherage" when that census was taken. The Bartlett Yancey School built in 1924 soon was inadequate physically and plans were adopted for a separate high school building (built 1935/1936). Thus, it apparently was during 1930-1935/36 that the old Yanceyville Academy building was used for overflow classrooms.

Note: While the name "Yanceyville Academy" was retained, the school had been converted to a public facility around 1910 (but possibly earlier; see below).

Caswell County had a long history of private academies, beginning with the Caswell Academy, chartered in 1802. What connection, if any, is there between any of the early private academies and what became the public Yanceyville Academy (immediate successor to the Bartlett Yancey School)? Here is a possible scenario:

"In 1909 or soon afterwards, by act of the General Assembly, proceeds from the sale of the Yanceyville Female Academy were turned over to F. W. Brown, N. C. Brandon, and T. J. Florance to be used in repairing and improving the Dan River Institute which had been used as a public school since 1897. The original Dan River Institute was located on the grounds of the later Bartlett Yancey School." 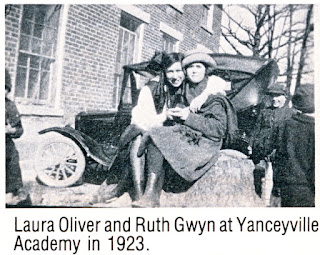 "Miss Lena Walser of Atlanta, who has been visiting her uncle, F. T. Walser, in Woolsey, left this morning for Yanceyville, N. C., where she will take up her work as teacher of music in Yanceyville academy."

Katherine May (Katie) Compton (1887-1976) taught in the Caswell County schools and at the Yanceyville Academy. She was a graduate of UNC-G and did graduate work at the New York School of Music and Art. She taught piano at Mitchell College and at the orphanage at Barium Springs.

"The Yanceyville Academy ended itw work for the session Friday, and the children and patrons had a picnic on the campus. A nice dinner was served, and the occasion seems to have been thoroughly enjoyed."

"Prof. J. W. Bennett, of Yanceyville Academy, spent the past few days with his people near town."