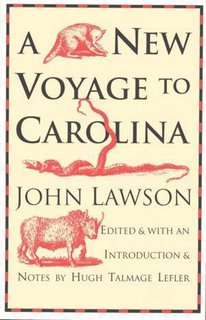 In his exploration of North Carolina during the early 1700s John Lawson probably did not make it to the area that now is Caswell County; but he came very close. He certainly made it just south of Caswell County, to the Haw River, Hillsborough, and Durham vicinities. He recorded fording the Haw River at Swepsonville. Do you know for whom Swepsonville is named and the Caswell County connection?

Lawson's exploration of our fair state was promoted by an acquaintance who told Lawson "that Carolina was the best country that [he] could go to."

He published his daily journal of the 1000-mile trek through Carolina, and it is a fascinating story. He then went on to help establish the North Carolina towns of Bath and New Bern.

Fortunately, the University of North Carolina Press now has available a very reasonably priced paperback version of Lawson's A New Voyage to Carolina, which includes much needed edits, an index, and an introduction and notes by noted North Carolina historian Hugh Talmadge Lefler. This is a reprint of a 1967 edition that has been unavailable for quite a while.

Here is the description by the UNC Press:

John Lawson's amazingly detailed yet lively book is easily one of the most valuable of the early histories of the Carolinas, and it is certainly one of the best travel accounts of the early eighteenth-century colonies. An inclusive account of the manners and customs of the Indian tribes of that day, it is also a minute report of the soil, climate, trees, plants, animals, and fish in the Carolinas.

Lawson's observation is keen and thorough; his style direct and vivid. He misses nothing and recounts all -- from the storms at sea to his impressions of New York in 1700, the trip down the coast to Charleston, and his travels from there into North Carolina with his Indian guides.

The first edition of this work was published in London in 1709. While various editions followed in the eighteenth century -- including two in German -- this edition is a true copy of the original and is the first to include a comprehensive index. It also contains "The Second Charter," "An Abstract of the Constitution of Carolina," Lawson's will, and several previously unpublished letters written by Lawson. A number of DeBry woodcuts of John White's drawings of Indian life, sketches of the beasts of Carolina which appeared in the original 1709 edition, and Lawson's map contribute additional interest to this volume.
The website for the UNC Press is: http://uncpress.unc.edu/default.htm

Here are the volunteer CCHA officers and directors for 2005-2006. These are the good people who devote their time and energy to make sure that the history and heritage of Caswell County is preserved. They deserve our thanks and support. Email or telephone them with any matter you have that relates to Caswell County's history.

Contact them anytime. They welcome your inquiries and suggestions.

Richmond Stanfield Frederick, Jr.
Posted by RSF at 1:02 AM No comments:

Ann of the Ku Klux Klan by Tom Henderson 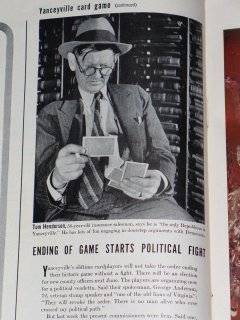 Tom Henderson of Yanceyville, N.C., wrote of many subjects during his years as a journalist and free-lance practitioner. One of the little booklets that he authored was titled Ann of the Ku Klux Klan. This probably was in the 1940s.

I do not know what this book contains, but would like to read it. If you know where it might be bought or borrowed please email me (rfrederi2@comcast.net). Any copy that I obtain eventually will end up in the Gunn Memorial Public Library or the Richmond-Miles History Museum (both in Yanceyville).

Note: The photograph that accompanies this post is of Tom Henderson, but otherwise has nothing to do with Ann of the Ku Klux Klan. It is, however, the only image I have seen of Tom Henderson and is provided courtesy of Life magazine. If you have a photograph of Tom Henderson to share, please send it to me at rfrederi2@comcast.net. Thanks.
Posted by RSF at 5:39 PM No comments: 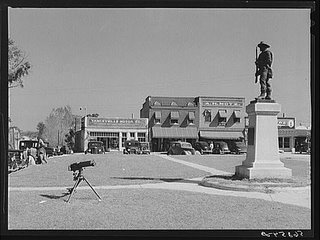 We published a dispatch yesterday announcing the killing of Mr. Nat Johnston and the dangerous if not fatal wounding of George Williamson, Jr. by Felix Roan, at Yanceyville, Caswell county. The following particulars we gather from a dispatch to the Lynchburg News, which will be read with interest as the families of the young men are very prominent in this State.

While I certainly am not attempting to open old wounds, I believe the trial of Matt Ingram deserves coverage on the CCHA website. If you feel differently, please let me know why. Historian William S. Powell provided some information on the matter in his history of Caswell County (When the Past Refused to Die: A History of Caswell County North Carolina 1777-1977 at 537).

Note that Matt Ingram consistently was called Mack (and even Mark).

This Mack/Matt naming issue has been around for a while. Mack/Matt Ingram was born June 6, 1910. Thus, he was counted in three US censuses (1920, 1930, and 1940). On all three he was enumerated as Mat or Matt. However, this was the census taker ascribing the name.
The name Mack first shows up in his World War II Draft Registration Card (October 1940), and he signed this card as "Mack."
His Virginia death certificate shows: "James Mack Ingram" and this name is on his grave marker at the Sassafras Grove Baptist Church. The informant on the death certificate is his daughter Mattie.
Several who have researched this matter have arrived at different conclusions:
"Ebony" magazine published extensively on the case, including spending considerable time with the family. That magazine used: "Matt"
However, "Time" magazine called him "Mack"
Mary Frances Berry in her article published in "The Journal of African American History" referred to him as Matt.
The African American Intellectual History Society uses "Mack"
Of course it is possible that he went by both names, with one being a nickname.
Read more »
Posted by RSF at 10:27 AM 1 comment: 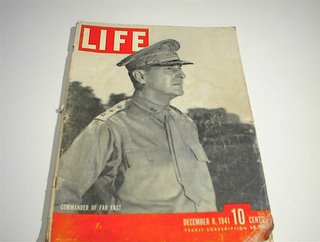 In the fall of 1941 Life Magazine photographer Walter Sanders spent time in Caswell County taking photographs for an upcoming article that used the Yanceyville Card Players as a theme to showcase the village of Yanceyville and surrounding Caswell County. He captured over 200 images.

The article ran in the 8 December 1941 Life Magazine, but the events of 7 December 1941 forced the Life editors to cut the Yanceyville story short.

I have researched the obvious places, but no luck so far.

PS The Life Magazine article that was published, although shortened, is excellent. If permission can be obtained it will be reprinted on the CCHA website. General Douglas MacArthur is on the cover.