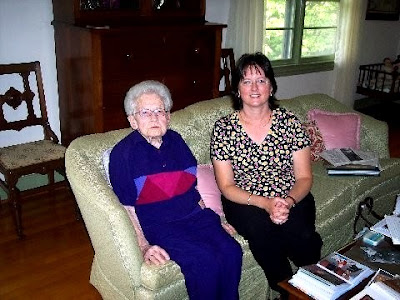 "Lib" was born in Person County, N.C. on July 5, 1912, the tenth and youngest child of William George and Capitola Pointer Rogers. A 1929 graduate of Roxboro High School who starred as a five foot tall basketball forward, she began her teaching career in 1931 in Dover, Craven County, after graduation from East Carolina Teachers' College. There she met agriculture teacher M. A. ("Happy") Morgan of Wake County, whom she married in 1935 and who preceded her in death in 1984.

She moved to Smithfield in 1939 when her husband was named County Agent. Throughout her marriage she loyally supported her husband, whom she called "Morgan", who was a leader in the Farm Bureau. The two of them enjoyed trips to National Farm Bureau conventions and a multitude of North Carolina State Wolfpack athletic events, as well as traveling together during retirement. Lib returned to school teaching in 1956 and at the same time earned her B. S. degree from Atlantic Christian College. She strongly believed in the value of an education. Her teaching made it possible for her four children to receive college educations.

Lib grew up a member of Lea's Chapel United Methodist Church, established in 1750 in Person County. She became a member of First Baptist Church after she and her husband moved to Smithfield in 1939. She taught in the Sunday School Beginner Department for many years.

Lib was adventuresome. She attended the 1933 Chicago World's Fair on press credentials, twice visited the London site of her ancestor John Rogers' burning at the stake for his religious views, flew to Paris from Raleigh-Durham on the Concorde, at age 85 traced her family's roots throughout the British Isles, and at age 91 followed the trail of her kinsman, William Clark, on the Lewis and Clark Expedition to the Pacific Ocean.

She attended the retirement celebrations of her husband and sons and the college and graduate school graduations of all of her grandchildren.

Lib co-chaired the Smithfield Appearance Commission for ten years, and was named 1974 Co-Citizen of the Year by the Greater Smithfield-Selma Chamber of Commerce in recognition of this involvement. A personal trip to the River Walk area of New Orleans inspired her to work to establish the Town Commons trail along her beloved Neuse River.

She enjoyed dancing, travel, genealogy, and bridge. She was a member of the Daughters of the American Revolution and the United Daughters of the Confederacy, was active in the Smithfield Junior and Senior Woman's Clubs, and the Down-to-Earth Garden Club. She was a lifelong progressive Democrat.

In lieu of flowers, memorial contributions may be made to the Smithfield Appearance Commission, P. O. Box 761, Smithfield, N.C. 27577.

Special thanks are given to her caregivers over the last several years, especially Debbie Chandler, Doris Bizzell, and Luann O'Brien. Thanks are also given to the staff of the Palliative Care Unit of the Wake Forest University Baptist Medical Center.

Permalink
Posted by RSF at 11:43 PM No comments: