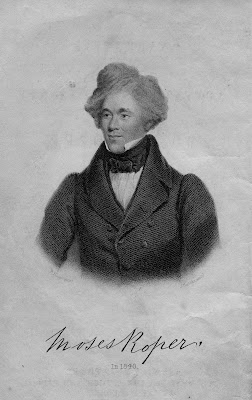 Moses Roper (c.1815 - 1891) was born in Caswell County, North Carolina, the son of a mulatto house servant (African-Indian) and her master, Henry Roper, a planter who exchanged mother and son for slaves from a neighboring plantation when Roper was six years old. As an adolescent, Roper led a peripatetic existence, repeatedly being sold or traded throughout the South before he was returned to Caswell County in 1832. During the next two years, Roper made many attempts to escape, each time being punished, then sold or exchanged to some other plantation owner in the county. At the end of 1833, Roper was purchased by a north Florida trader, whose bankruptcy led to the eighteen-year-old slave's employment as a steward on a New York-bound packet. Once anchored in New York, Roper jumped ship and ran for freedom-first stewarding a canalboat on the Hudson River, then working as a farmhand in Vermont, until he saw newspaper advertisements for his capture as a fugitive slave. Roper left Vermont and briefly settled in New Hampshire before moving to Boston. There he began his affiliation with the abolitionist movement by signing the constitution of the American Anti-Slavery Society. But by late 1835, Roper, fearful of arrest and return to slavery, signed up as a steward on the vessel Napoleon and sailed for England

Several prominent British abolitionists assisted Roper once he arrived, especially Dr. John Morrison, John Scoble, and George Thompson, who were impressed with Roper's desire to secure an education and to serve the African missions. With the help of these British patrons and the assistance of Dr. Francis Cox, who bore a significant part of the expense, Roper successfully attended boarding schools in Hackney and Wallingford and later spent some time at University College in London during 1836. Throughout this period, Roper also attended many antislavery meetings and gave speeches on his slave experiences to people who were as impressed by his stature (Roper was 6'5") as they were by his account - an account that was one of the first given by a former slave to British reform audiences. 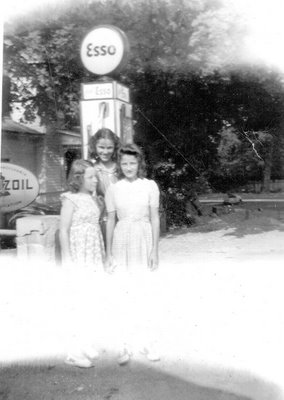 Above is an undated photograph (thought to be in the 1940's) of three lovely young ladies standing beside the Esso gas pump at Johnnie Gunn's Caswell Motor Company. In the background is the house then owned by John Yancey Gatewood (home of famous Yanceyville artist Maud Gatewood), which building today houses the Richmond-Miles History Museum and is the headquarters of the Caswell County Historical Association. Note the child's toys in the front yard. Query what a gallon of gasoline cost at this pump.

5. Girl Scouts on Square in Yanceyville

As with respect to all the images that have been posted as part of the CCHA Photograph Identification Project, the owner of the photograph, through the Caswell County Historical Association, retains all rights. Accordingly, copying, posting, publishing, and any other manner of distribution or use is prohibited without first obtaining the express written authorization of the copyright holder. Contact the CCHA if you have questions.