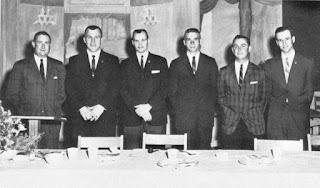 A note about 3rd party grading. PCGS and PMG do a good job putting a floor on quality within a grade range and have become proficient in detecting repairs (though occasionally they miss something, or see something that is not there, as we all can).

Notes housed in Net or Apparent holders have a wide range of quality from very nice (in rare cases may be nearly choice) to dogs with major problems, so each needs to be evaluated on their own.

However, PMG and PCGS focus on technical grading due to circulation and damage and do not have a mechanism for evaluating condition or eye appeal - whether a note is average, better than average, choice or gem for the grade based on its color, trim and margins. The exception to this are slabbed notes of New or Uncirculated grades to some degree. This is important as Very Fine, Extremely Fine or AU notes can have a wide range of values depending on these factors not reflected in the slab grade. A fully framed Confederate or obsolete note is worth considerably to a lot more than one that is trimmed into the margin for the same grade. Likewise, color is important. These factors can affect the value of a note by 50%, 2-1 or even 3-1, e.g., an AU 58 (PPQ or not) T-20 1861 $20 CSA note trimmed into the margin is worth between $150 and $300. The same grade, AU 58 (PPQ or not), with a full frame and good color/inking is worth something like $500 to $1000 depending on eye appeal. I will continue to use the terms plus for above average, choice and gem to mean varying degrees of superiority of condition and eye appeal of a note within a grade as documented in my book which is based on what collectors seek out and pay premiums for.

Here is an antique boarding house sign that measures about 13 1/4" by 36" and was originally found many years ago at a Yanceyville, NC estate sale. I think its either from Yanceyville or some other part of Caswell County. The sign is hand-painted "TURNER'S BOARDING HOUSE" on what appears to be a single wood board. I think it likely dates from sometime between 1870 and 1900. This sign is completely original with no touch-ups or restoration of any kind. Since the reverse was later painted white I think this may have once been a patch or part of a homemade piece of furniture. Some parts of the white lettering show more wear that other parts of the lettering.

Years ago some of the paint on parts of the lettering flaked away but currently doesn't seem to be in danger of more flaking in the near future. This sign was probably used for several years since on the top half you can see where some of the letters were painted over after the bottom layer of paint began to fade. Along parts of the left, right and bottom edge there is a section of light brown staining. I think this staining may have been caused by something that covered/pressed against this area. The staining might be removed or lessened if the right cleaner were used.

The wood board has a few age cracks with the largest going from about the R (in TURNER'S) to the right edge. If desired, a few drops of glue could be put in the crack which would make it a little less noticeable on the right side. Near the bottom edge are 3 antique nails that are not too distracting. Also not too distracting are a few small nail/worm holes that are spread out on the sign. Even with the minor staining and wear issues, this sign has a lot of folk art-Americana appeal and still displays really well like it is.

An Act to Establish an Academy at the Court House in Caswell County.

Whereas a number of the citizens of said county, are desirous of establishing an Academy for the promotion of Learning, at the court house aforesaid, having by subscription, erected a convenient building on a lot appropriated to that purpose, and Trustees being already appointed by the subscribers to carry the same into effect, and it is proper that they should be incorporated, therefore:

Be it enacted by the General Assembly of the State of North Carolina, and it is hereby enacted by the authority of the same, That Thomas Donoho, Solomon Graves, Jesse Carter, Alexander Murphy, David Mitchell, Richard Sampson, Marmaduke Williams, Michael Montgomery, John McAden, James Yancey and Henry Atkinson, esquires, shall be, and they are hereby declared to be a body politic and corporate, to be known and distinguished by the name of "The Trustees of the Caswell Academy," and by that name shall have perpetual succession; and that they, the Trustees, and their successors by the name aforesaid, or a majority of them, shall be able and capable in law, to take, demand, receive and possess all monies, goods and chattels that shall be given for the use of the said Academy, and the same apply according to the will of the donors; and by gift, purchase or devise, to take, have, receive, possess and enjoy and retain to them and their successors forever, any lands, rents, tenements and hereditaments of what kind or nature soever, in special trust and confidence, that the same or the profits thereof, be applied to and for the use and purposes of establishing and endowing the said Academy.

II. And be it further enacted, That the said Trustees, or a majority of them, shall have the power to make such laws and regulations for the government of the said Academy, and the preservation of order and good morals therein, as are usually made in such Seminaries, and as to them may appear necessary, and shall be able and capable to act and do all things whatever for the promotion of said Seminary, in as full and ample manner, as any body politic or corporate can or may by law.

III. And be it further enacted, That upon the death, resignation, inability, refusal to act, or removal of any of the said Trustees, it may be lawful for the remaining Trustees, or a majority of them, to elect others in the room of such Trustee dead, resigned, refusing to act, unable to attend or removal, and that the Trustee or Trustees so elected, shall have equal power, authority and capacity with the Trustees hereby appointed.

Earlier, while discussing Caswell County economic history and the county's prospects, several mentioned railroads -- specifically no Yanceyville railroad. Well, the lack of a railroad running through (or near) Yanceyville was not for a lack of interest by local community leaders. On several occasions a major railroad line through central Caswell County, North Carolina, was considered -- including obtaining charter authorization from the North Carolina General Assembly. Set forth here are accounts of efforts to make the railroad a reality, which never occurred. Note that the timeline is not entirely understood.

Just before the Civil War county leaders addressed the issue:

"A meeting was held in Caswell county, N. C., on the 1st instant, at which Col. Bedford Brown presided, and N. M. Roan acted as Secretary. The object of the meeting was briefly and lucidly explained, which was to consider the important interests of the county of Caswell in the

construction of a railroad from the company shops [Burlington] on the Central Railroad, via Yanceyville and Milton, to Barksdale's Depot. Col. Brown explained the great advantages of this road.

"Mr. Thomas McGehee Smith, of Milton, was called on, who entertained the meeting by a very admirable and practical speech, setting forth the great advantages of this route over every other, connecting the various sections of the country.

"On motion, the meeting adjourned to meet on Tuesday of April Caswell County Court, and that the friends of the road, in and out of the State, be invited to attend on that occasion." 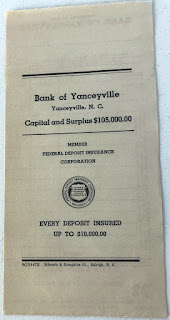 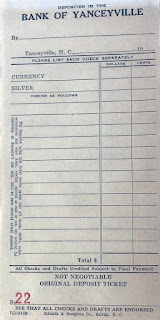 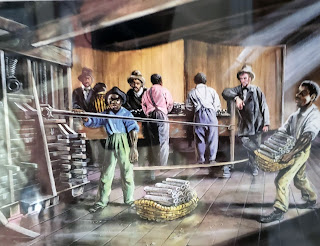 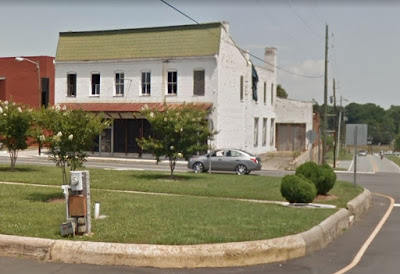 PRESERVING AN OLD BUILDING\ THE CASWELL MOTOR BUILDING, CONSTRUCTED IN 1894, IS A KEY PART OF YANCEYVILLE'S HISTORIC COURTHOUSE SQUARE.

The long struggle to save a key building on Yanceyville's historic courthouse square may soon be over.

Preservation North Carolina officials had worked since 1997 to find a buyer for the property. Although the building attracted a lot of interest, no one wanted pay the $100,000 it would cost to demolish the rear section.

That all changed in August when the rear of that building, already unstable from years of neglect, caved in. That cut demolition costs to $10,500.

Fidelity Bank, which recently opened a Yanceyville office, contributed $5,000 to the effort. Now the preservation group is seeking a donor for the rest.

Preservation North Carolina considers the building important because it is a key part of the landscape. It is perhaps the oldest commercial structure on the courthouse square, a National Register Historic District.

"That old building sits on the corner of the courthouse square," said Angela Greenfield, director of marketing for Preservation North Carolina. "If it's lost, your square is gone."

The old building has had a colorful history. At various times it housed a Masonic lodge, a telephone office, a drug store, government offices, a retail store and a Ford dealership.

Preservation North Carolina and Sallie Anderson, a Yanceyville historian and editor of the Caswell County Historical Association's newsletter, pieced together this history:

The Clinton Masonic Lodge, the original owners of the building, purchased the land in 1856 from William Brown, believed to have been son of Bedford Brown, U.S. Senator from North Carolina from the 1820s to 1840. The Browns had extensive real estate holdings in the Yanceyville area.

The lodge erected a building on the site, but it apparently burned during the 1880s. So the lodge put up the current structure in 1894.

Three years later, Archie Long, whose family also owned a lot of property around town, purchased the building at auction for $1,600.

In 1917, Crowell Auto Company bought the property for $3,000 and opened a Ford dealership. John Gunn, one of Crowell's employees, bought the building and dealership during the 1930s.

Gunn was apparently responsible for the addition that workers are now dismantling and for changing the name to Caswell Motor Co. It more than doubled the building's space to 12,000 square feet.

Gunn operated the dealership until retiring sometime in the 1960s or 1970s. The dealership continued at that location for several years, but it had become a retail store before closing for good during the 1980s.

Preservation North Carolina hopes to complete the demolition project and transfer the property by year's end. The organization adds covenants to the deed that say the exterior can't be changed. The covenants remain with the property forever.

"It could be a sweetheart," said Myrick Howard, Preservation North Carolina's president. "It once was." Contact Meredith Barkley at 373-7091 or mbarkley@news-record.com