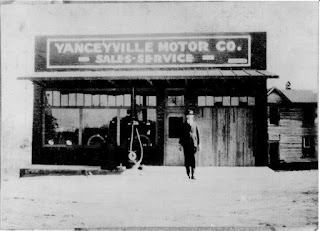 Based upon our research, the answer is the Ford agency/dealership of John Abner Massey (1881-1956) established before WWI. He built the Yanceyville Motor Co. building on the Square in Yanceyville (see photograph). However, whether this building was associated with his Ford agency/dealership is not known. In the early years he would sell a Ford vehicle and take the purchaser to Raleigh to arrange delivery. The Ford "state agency" was located there.

Massey probably lost the Ford agency/dealership when A. B. Crowell (1880-1970) established Crowell Auto Co. around 1920, which was an authorized Ford dealership. This was in the building recently demolished that became Caswell Motor Co. when John Oliver (Johnny) Gunn (1892-1992) bought out Crowell in the mid-1930s.

Massey eventually (1923) became a Willys-Knight agent/dealer. He had a vehicle on display in his Yanceyville Motor Co. building when he remodeled the front. However, when time came to remove the vehicle it was impossible without pulling down the front wall, which Massey did! The "display" vehicle had been in the building so long that the tires had rotted.

Photograph: John Abner Massey in front of his Yanceyville Motor Co. building on the east side of the Square in Yanceyville, NC. Seen behind the building to the right his the house he built for his family. Massey built many houses in and around Yanceyville. Courtesy Anne McGuire Harvey. 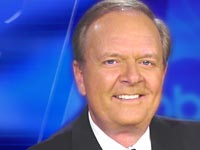 Occasionally it seems fitting to explore the history of the living. We spend most of our time at the Caswell County Historical Association covering people and events of the far past. Today our most-deserving subject is Larry Neal Stogner.

Larry Stogner was born 1947 in Burlington, North Carolina, to the late Earl Brown Stogner and Dorothy May Watlington. However, it is Yanceyville, North Carolina (Caswell County) that Larry calls his "hometown". Except for a year in Danville, Virginia, Larry attended school in Yanceyville, graduating from Bartlett Yancey High School in 1965.

Then it was off to college at the University of North Carolina, where his education was interrupted by the Vietnam War, in which Larry served as a member of the United States Air Force. After the War, he completed his education and graduated from UNC in 1973. First working as a reporter at WRAL in Raleigh, Larry then joined the news team at ABC affiliate WTVD (Channel 11 locally). He sat behind the anchor desk for the first time at 11 p.m. March 8, 1976. And, except for a short assignment to the Raleigh Bureau in the late 1970's, Larry has been the well-known WTVD news anchorman.

Thus, Caswell County's own Larry Stogner, who recently celebrated thirty years with WTVD, has become the senior broadcast journalist in the northern Piedmont market (Raleigh-Durham and surrounding areas). For many (almost a million each day), the evening news is not the same without Larry's presence.

When Larry was surprised on-air with a thirty-year anniversary cake, here is what his colleague Angela Hampton had to say:


Those of you who watched WTVD in March 1976 will know exactly what we're talking about. It was 30 years ago that Eyewitness News anchor Larry Stogner started his long and successful career here at ABC11.

When you think about news in this part of North Carolina, you naturally think about Larry Stogner. Before Jennings, Brokaw and Rather - - there was Stogner. Larry beat those broadcast legends to the anchor desk by five years.

Larry began his career at ABC11 on March 8, 1976. That summer, America celebrated its 200th birthday - - and in the fall, a peanut farmer from Georgia, Jimmy Carter, was elected president.

So many things about our hometowns and our world have changed since then, but Larry remains a constant, comforting presence on the 5:00 and 6:00 editions of ABC11 Eyewitness News.

When Governor Jim Hunt made his first, historic trade trip to China, it was Larry who walked side-by-side at the Great Wall. Larry reported to us when Dean, Michael and James brought back the first NCAA championship to Chapel Hill.

When ABC11 viewers gave more than $1 million dollars for firefighters' families after 9/11, it was Larry who hand-delivered the check to New York's police commissioner.
It was Larry who insisted that he be on the ground with our Fort Bragg troops as they fought the Taliban in Afghanistan.

Larry has brought us many memorable stories over these past thirty years, but mainly, we appreciate our anchor man for who he is: Native North Carolinian, working journalist, proud Vietnam veteran and our good friend.

This month, we're saying, "Thanks for the company, Larry." Here's to the years to come.

Larry and his wife Bobbi live in Durham, North Carolina.
Posted by RSF at 12:42 PM No comments:

Below is an article on Lawrence Clem (Larry) Snead, formerly of Yanceyville, North Carolina. Larry is the only child of Clem Preston Snead (1906-1982) and Elizabeth Sutton Snead (1914-1991). Larry graduated from Bartlett Yancey High School and attended East Carolina University. His weight-loss accomplishments are amazing! 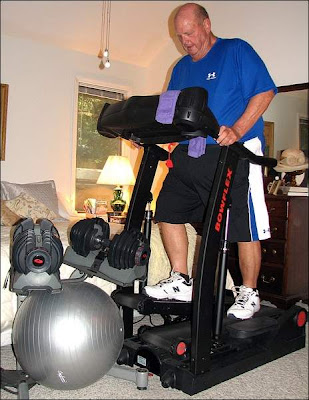 Larry Snead, 64, works out on his stair step machine in his Oak Island bedroom. Snead has lost 152 pounds in a year and a half. In December 2005, he weighed 450 pounds, but through eating right and exercising he has and continues to lose weight healthfully. Staff Photo By shelby sebens/Wilmington Star-News.

Oak Island | A little more than a year and a half ago it was hard for Larry Snead to walk from his recliner to the bathroom. His knees and hips would ache and his breathing would labor.

Snead, in his early 60s, weighed 450 pounds. The doctors said his cholesterol and weight were too high and that he would eventually need knee replacements.

His only form of exercise was the walk from his truck to the Flying Pig Coffee House where he would visit with friends until exhaustion took over. He walked with a cane or crutches, depending on the severity of his pain.

"I knew I needed to do something," Snead said.

So at the advice of a friend, he went to see chiropractor Karen Fairfield on Dec. 1, 2005. He knew he needed to lose weight, so after Fairfield adjusted his neck, back and knees, he took her advice to write down what he eats and to exercise five minutes a day.

Much has changed since then. Snead has lost 152 pounds and can do much more than walk a few feet. Two weeks ago he rode 72 miles in two days during a bike ride for multiple sclerosis in Myrtle Beach. He works out two hours every day and is eating healthy and feeling well.

"I didn't need a replacement. I needed weight loss and exercise," he said Saturday after finishing his weight routine in his bedroom that now resembles a small gym.

"I'm so proud of him," Fairfield said. "He really did everything that I asked."

The biggest challenge, Snead says, is staying consistent with his workouts that include biking for miles, swimming and weight lifting.

"I'm sore a lot," he said, adding the first six months were brutal on his knees and hips.

But he has adapted well, surpassing his first two goals of losing 100 pounds, then 150. His next goal is to have lost 200 pounds by his 65th birthday in March.

Snead's accomplishment not only has improved his health, but it has also helped others.

"It's an inspiration to all of us to get in shape and stay in shape," said Ben Brooks, who joined Snead in the Myrtle Beach bike run. It was his first time riding for more than recreation, and he is already planning for next year.

Rebecca Jones, owner of the Flying Pig, said she has seen more people riding bikes around town than ever before.

"He is all over the island," she said of Snead, adding people will honk and wave as he rides by.

Jones has been so moved by Snead's weight loss that she is trying to get him on The Oprah Winfrey Show.

There is no shortage of people who support Snead.

Many of them sat outside the Flying Pig on Saturday as a musician sang in the background. As Snead grinned from ear to ear, his friends spoke of a man who inspires and amazes them.

"He's got a determination like most people don't have and should have," Vereen said.

Snead is diligent. He continues to write down every day what he eats and how much he exercises. His massage therapist suggests that he take a day off, but now he's addicted to the adrenaline-pumping workouts.

And his wife, Mary, couldn't be happier.

"I feel like he's extended his life," she said.

The above article and photograph was reproduced here by permission of the StarNewsOnline, which retains all rights.
Posted by RSF at 12:42 PM No comments:

The A. H. Motz Building is on the east side of the Square in Yanceyville, NC, part of the central business district.
Designed by architect James Franklin Moorefield (1885-1962), it was built in the 1920s for merchant Alexander Hamilton Motz (1885-1973).

The roadster (far left) is the oldest of the three cars in the photo, as it still is running on wooden spoke wheels. It has a rumble seat as well, as you can see part of the step on the back fender placed on the right side of the car for riders' easier access - back lights in those days were on the left fender. Unfortunately, there's not enough of the car shown to identify the make, but the middle one is a Ford coupe, and the one on the right with the arched rear window is a Chevrolet. Source: Thomas Gunn 28 September 2020 Post to RSF Facebook Page.

November 16, 1959, postmark from Yanceyville, North Carolina, on a C-10 sized cover with an all-over backside cachet advertising Chevrolet automobiles. The automobile shown in the advertisement is a 1960 Chevrolet "Nomad" station wagon.