Summaries of census records on subscription services such as Ancestry.com provide helpful information. However, the summary does not exhibit all the data captured by the census enumerator. Take a look at the actual record.

Example: The census summary does not show the amount of personal property owned. For southern records before the Civil War this item can be revealing. A southern farmer with a large amount shown as personal property in 1860 may have been, and probably was, a slave owner. While slave schedules also exist, they are spotty and not always reliable.

As many slaves took the surname of their owners, this could be helpful for African-Americans researching their roots. 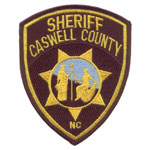 2. Five held the office twice: David Shelton was the first. Then Jesse C. Griffith. Later, John Henry Gunn and John Yancey Gatewood traded the office back and forth for over 30 years (1920-1951). Note that Sheriff Jesse C. Griffith was arrested by Colonel George Kirk during the Kirk-Holden War.

3. It was John Henry Gunn who decided not to seek re-election but changed his mind when he learned that his pension was not available unless he reached retirement age while still in office. He ran again, and was re-elected, presumably with pension intact.

Sheriff Lynn Banks Williamson (1918-1987), Caswell County Sheriff 1953-1958. His badge was found by an operator of a Garrett Metal Detector, who returned the badge to the Williamson family (believed to have been lost by Sheriff Williamson while quail (bob white quail, of course) hunting).

"Oaths having been taken, the [June 1777] minutes tell us, 'Mr. John Lea was appointed to open Court which he did accordingly.' The justices who had recently qualified then ballotted for a clerk and William Moore was chosen. Soon afterwards David Shelton was appointed sheriff. The following day before the court both of these new county officers entered into bond. For Clerk Moore the securities for his bond in the amount of £1000 were David Shelton and Hugh Dobbins, Jr. For Sheriff Shelton they were William Lea, William Moore, Hugh Dobbins, Jr., Adam Saunders, John Lea, and Matthew Jouett, and his bond, a little later, was set at £5,000."

7. James Edward Gwynn (1919-1980) was appointed a Caswell County Deputy Sheriff in 1966 (by Sheriff Bobby Poteat), and is believed to be the first African-American to serve in that capacity.