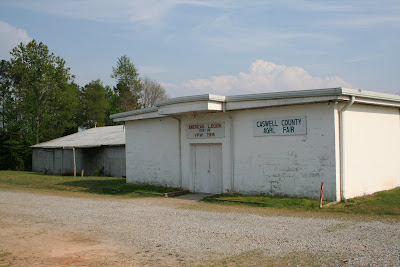 With half the attendance of what was needed to break even at the 2004 county fair, the fair lost about $3,000. Its carnival midway company for the last several years, Inners Amusements, said it couldn’t afford to bring its 15 rides to Yanceyville again this year, according to Caswell County Fair Association board member Hoyt Moore.

Moore and his wife, Doris Moore, said they’ve helped coordinate all 49 of the county’s fairs, including last year’s.

“We were hoping to get to that 50th anniversary (this year), but we didn’t make it,” Hoyt Moore said.

Moore said attendance had declined in the several years before 2004.

“Last year, it just dropped off,” he said.

“People just didn’t take an interest. I reckon there are so many things to do now. I don’t know.”

“We probably should have gone out five years ago, but we just kept hanging in there,” he said.

The Caswell County Fair Association, which is made up of five members each from Yanceyville’s American Legion Post 89 and Veterans of Foreign Wars Post 7316, owns the county fairgrounds on County Home Road.

Proceeds from the Caswell County Fair were donated to veterans’ hospitals, Moore said.

The fair is not a for-profit venture, he stressed. He said Caswell veterans originally decided to host a county fair in order to promote what the rural county had to offer and to provide an affordable outdoor event for residents.

“The board is kind of discouraged at this particular time,” Hoyt Moore said.

“What’s really sad is that we used to have to beg for help (with the fair),” said Doris Moore. “Now everybody says, ‘Oh, Mrs. Moore, we’d have been glad to help.’”

Hoyt Moore said if the community let him know it would support a county fair in 2006, a fair board member would go to the North Carolina Association of Agricultural Fairs’ annual convention in January and try to find a carnival company willing to run the fair’s midway next year.

Fairs freshen up to broaden appeal

"We've got to come up with something unique," says Larry Gabriel, agriculture secretary in South Dakota, where some legislators considered shutting down the money-losing state fair. "It's never going to get easy to keep a fair operating, because we're competing against so many more events."

Competition comes from amusement parks, casinos and vacation destinations such as Branson, Mo., and Las Vegas, he says.

Rising costs for fuel and insurance contribute to fairs' budget problems. Most fairs are subsidized by county or state governments. Some fairs are adjusting to tough times by shortening their runs or rescheduling to the July Fourth or Labor Day holidays. Many are updating exhibits and contests. Some fairs are enlivening their core focus by adding animal birthing centers and milking parlors.

Max Willis of the International Association of Fairs and Expositions says the group doesn't track fairs' bottom lines. Fairs are trying "to appeal to their clientele," he says. "They have to keep up with the times."

New kinds of fun on schedule

Many county fairs are updating activities:

*The Wilson County, Tenn., fair has contests for decorated skateboards and text messaging.

*A "cellfest" at the Marin County, Calif., fair includes videos and photos created by fairgoers on their cellphones. There's also a Harry Potter-inspired exhibit with a 20-foot rotating cavern.

*Mexican and Middle Eastern food are a trend at New England fairs, says Bob Silk of the New Hampshire Association of Fairs and Expositions. "People are getting away from just eating the sausage, french fries and fried dough," he says. 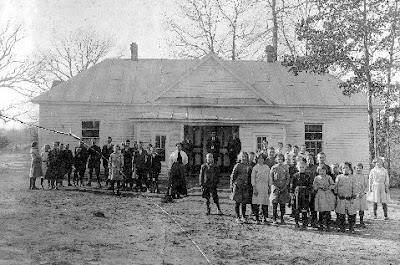 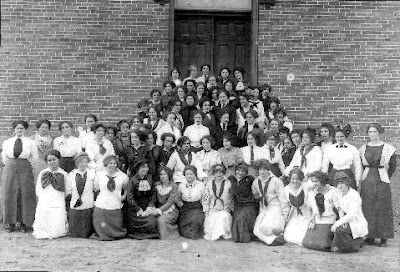 The photographs came from a Burlington estate sale, and the photographer of the second shot was from Durham. Note that the same teacher appears in both photographs. In the second she is standing to the far left. In the first she is almost in the center of the image.

Recognize the location or the people? Any idea as to the date?

Permalink
Posted by RSF at 7:22 PM No comments: 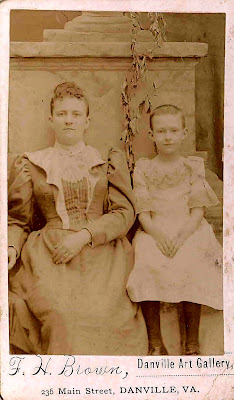 (Click on Photograph for Larger Image)
This photograph was in the papers of Mary Kerr Motz (1917-2005). On the back is written "Marnie Kerr." Marnie was the nickname of Martha Frances Kerr Motz, the mother of Mary Kerr Motz. Which person is Marnie Kerr, if either, is unknown.

Permalink
Posted by RSF at 11:09 PM No comments: 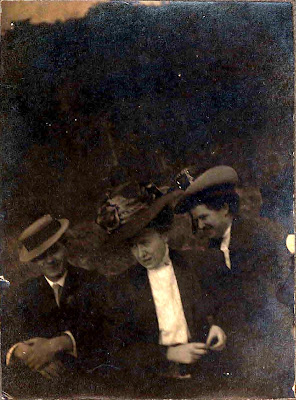 This photograph was in the papers of Mary Kerr Motz (1917-2005) when she died. Written on the back is what appears to be "Marnie Kerr." Marnie was the nickname of Martha Frances Kerr (1883-1965) who married Alexander Hamilton Motz (1885-1973) and was the mother of Mary Kerr Motz. Accordingly, one of the females in this photograph probably is Martha Frances (Marnie) Kerr Motz.
Permalink
Posted by RSF at 10:27 PM No comments: 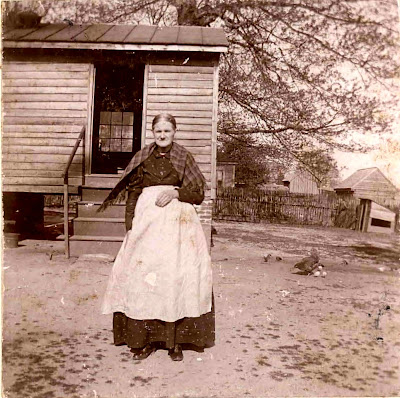 The person in this photograph has not been identified. The following is written on the back:

"J. H. Kerr, Yanceyville, NC"
The name originally had been spelled "Carr" but was overwritten with "Kerr." The photograph came from the papers of Mary Kerr Motz, who died 2005 in Yanceyville, North Carolina.

Permalink
Posted by RSF at 8:12 PM No comments: 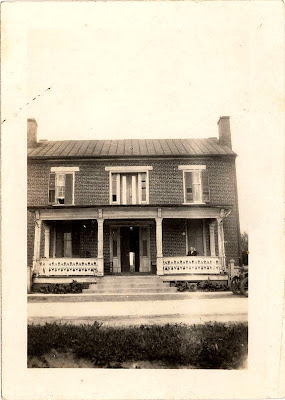 The date of this photograph is unknown. It was found in the papers of Yanceyville resident Mary Kerr Motz after her death in 2005. However, note that the front porch remains intact. Today that porch is greatly reduced, apparently as a result of the street's being widened some decades ago. Also note the motor vehicle to the right of the right. While the age of the vehicle does not necessarily determine the year the photograph was taken, it does provide some guidance as to its age. 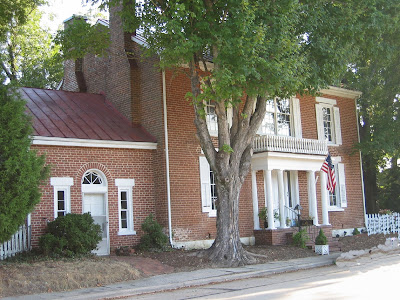 (Click on Photograph for Larger Image)
Posted by RSF at 6:47 PM No comments:

The following article originally appeared in The Caswell Messenger April 13, 2005: 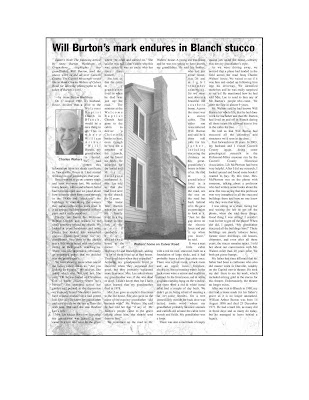