"Echoes From the Corridors of Time"
By Tom Henderson

I wish I had written this! I do not know who wrote it, but he was a scholar.

Seldom have I read such a beautiful pen-picture of a Revolutionary War soldier who was born almost 200 years ago. His old homestead and his family burial ground are just a mile, as the crow flies, from my own home. On several occasions I have crawled through the honeysuckles, locust trees and bramble briars, to copy the inscription on his tombstone. He is the soldier who "fired the first cannon at Yorktown." I knew personally two of his sons - and all of their children.

He was the great-grandfather of the former Miss Lillie Pinnix who married "Cap" Carey Howard King, of "Gentleman's Ridge" or "Rock Academy School," nearby "Hogan's Creek" and "Killquick," the Caswell couple which last week celebrated their 69th wedding anniversary. She was born almost in eyesight of my home - where now resides Mrs. Mary (Slade) Hodges, widow of Lynwood Fielding Hodges, who died last year.

This record, preserved for all time on film and in a "Miscellaneous Records" in the fire-proof office of the Register of Deeds of Caswell, is but another evidence of the invaluable services, beyond the call of duty, of Register John Burch Blaylock.

The following newspaper notice of death is posted in front part of Book HH, in the Caswell County Registry.

Another Patriot of the Revolution is Gone!

Died, in Caswell, on the 13th of August, Sterling (Starling) Gunn; Mr. Gunn was born in Notoway County, Virginia, the 9th day of May, 1764, and at an early age joined the American Army, and rendered the services of a true and brave soldier until peace was declared. - He was under command of Marquis Lafayette at the surrender of Cornwallis, and assisted in placing and firing the first gun upon the British at Yorktown. For his good services and conduct he was rendered by a command in his company. - Having passed some of his best years as a soldier, in striving to obtain the unmeasured blessing of freedom, he ever seemed to feel that it was a high obligation upon him to exercise all the privileges and perform all the duties of a citizen. He rarely if ever failed to go to the polls to express his choice of views by his vote, and though of such an advanced age, yet at our last elections his venerable person was to be seen at the ballot box exercising that right which is as powerful in the preservation of liberty as the cartridge box was in securing it.

Kind in his manner, and playful in his disposition, all who approached him felt their attachment deepened and their reverence heightened for the gray-haired soldier and patriarch.

For fifty years he was a pious and exemplary member of the Methodist Church, and his whole life was in harmony with his holy profession, so was his death a perfect manifestation of the Divine feelings that dwelt within him. He saw the shadow of the wing of death falling upon him, yet it produced no alarm; no fear as to consequences. On the contrary he seemed to feel no sting in the pains of death, that the triumph of the grave was no victory.

The venerable authors of our liberties are fast passing away! But one other remains in our midst, and the unchangeable laws of life and death show to us that in all probability the gates of the grave will soon open to receive him.

As they drop one by one into the tomb, we all might well pause from busy life and drop a tear to their memories, as a small token of gratitude for the rich inheritance they won for us by their valor, and preserved for us by their prudence.

The children of Starling Gunn as recorded in his Will, were:

Betsy B., Richard B. Thomas, Patsy, Daniel, Susana, Asa, Polly, Barbary, John, Dr. Allen, and James (grandfather of Mrs. "Cap" King.) His daughter, Betsy, married Col. Joseph Pinnix, of an old Caswell family and a Confederate officer. When he came to our home, he would call for an eating fork, plunk it a time or so, and "hist" the hymn "Amazing Grace" in deep and rich bass.
_______________

1. A couple of fairly obvious typographical errors were corrected in the foregoing.

7. The foregoing Tom Henderson newspaper article kindly was shared by Thomas Hilton Gunn, a descendant of Starling Gunn. The article had been clipped by Tom Gunn's mother and kept in the family for over half a century.

Permalink
Posted by RSF at 3:59 PM No comments:

(click on photograph for larger image)
To see other Bank of Yanceyville bank notes go to North Carolina Collection.

United Daughters of the Confederacy 1972 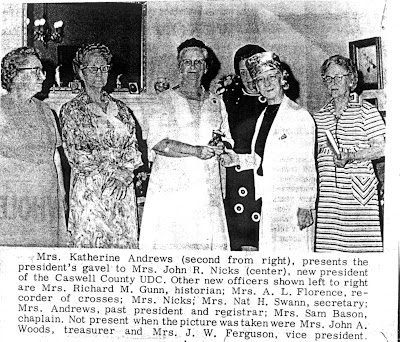 (click on photograph for larger image)
This photograph was take in 1972 apparently at the home of Mrs. John R. Nicks in Yanceyville, North Carolina, which structure now houses the Richmond-Miles Museum.

Mrs. Katherine Andrews may have been a resident of the Baptist Home in Yanceyville (building beside Dongola) and was not originally from Caswell County. She was a piano teacher.

Mrs. Richard M. Gunn may be part of the Gatewood family that owned Gatewood Coal Company in Danville, Virginia. She apparently is Lelia Marie Gatewood who married Richard Marcellus Gunn (1879-1960).

In the course of researching a history of Milton, North Carolina, I was permitted to study the minutes of the Session of the Milton Presbyterian Church. This document contains records from 1826 through 1970. Through the prism of these minutes, a microcosm of social customs comes into clear focus, none more interesting and sometimes surprising than the entries relating to African-American members of the congregation.

The village of Milton, whose population has never exceeded a thousand, lies along a steeply rising hill between the Country Line Creek on the southeast and the Dan River on the northwest in Caswell County, North Carolina. The Dan also marks the dividing line between Virginia and North Carolina.

Office of Archives and History

State Historical Records Advisory Board of 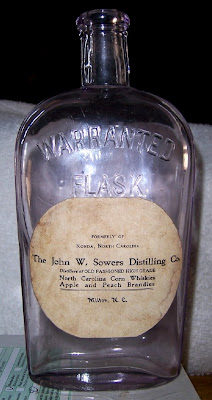 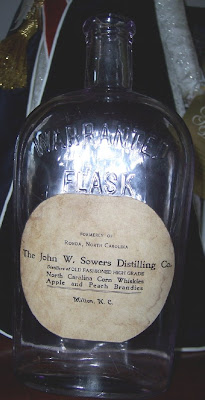 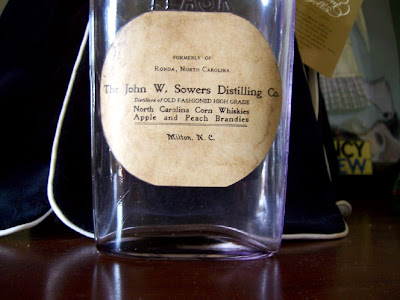