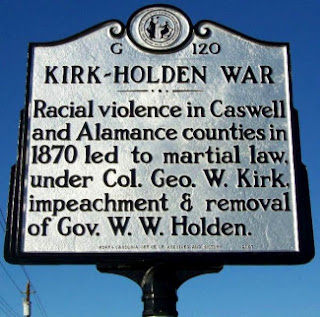 The lynching of Wyatt Outlaw on the courthouse square in Graham in 1870 continues to reverberate across the generations. The consequences for North Carolina were profound, leading to the first impeachment of a governor in U.S. history. Outlaw’s death, like that of State Sen. J. W. (Chicken) Stephens in the Caswell County courthouse, in part precipitated the “Kirk-Holden War.”

Carole Troxler, Elon University professor, has examined the historical record concerning Outlaw. Biographical details, gleaned from Congressional investigations into the 1870-71 Ku Klux Klan “outrages” and transcript of the impeachment trial of Gov. W. W. Holden, are sparse. Outlaw, likely the offspring of white merchant Chesley Faucett and Jemimah Phillips, a free black, served in the Union army, in the 2nd Regiment U.S. Colored Cavalry, first in Virginia with a later posting in Texas along the Rio Grande. On his return home, he opened a woodworking shop on North Main Street in Graham, repairing wagons and making coffins, in addition to specialty trimwork. (Troxler believes it likely that he trained with Thomas Day of Caswell County.) In 1866 he attended the second freedmen’s convention in Raleigh and soon after organized the Union League in Alamance as well as a school and church. Gov. Holden in 1868 appointed him as a town commissioner in Graham and he was elected to the post the following year. That board in 1869 organized an armed night patrol in response to the activities of the Klan.

On this Day in History

On February 26, 1870, Graham town commissioner Wyatt Outlaw, an African American, was lynched by a band of Ku Klux Klansmen.

Outlaw served in the 2nd Regiment United States Colored Cavalry during the Civil War. In 1866, he attended the second freedmen’s convention in Raleigh and soon after organized the Union League, an organization that aimed to promote loyalty to the United States after the Civil War, in Alamance County, as well as a school and church. Outlaw became the target for a Klan mob because he was an effective leader, able to work with both races.

With Klan violence mounting following Outlaw’s murder, Governor William Woods Holden declared a state of insurrection in Alamance and Caswell counties in July 1870. A militia force under George W. Kirk of Tennessee suppressed the Klan in those counties.

Nearly 100 Klan suspects were arrested during the “Kirk-Holden War,” but most were released on technicalities and none were ever tried. White supremacists gained control of the General Assembly in elections that November and impeached Holden for using the militia against the Klan. He was cast out of office in March 1871.

Superior Court judge Albion Tourgee indicted 18 Klansmen for Outlaw’s murder, but an amnesty bill from the legislature resulted in their never going to trial.
Posted by RSF at 12:55 PM No comments:

In the 1930s and early 1940s a beer joint named the "Green Mill Dance Hall" operated on what now is old US Hwy 29 near the intersection with Holland Road in Pelham, Caswell County, NC. It was across the railroad tracks road from the quarry. At one time the building housed Sheldon Baptist Church.
Posted by RSF at 12:52 PM No comments: 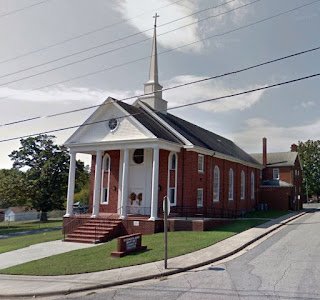 Source: Stokesland Baptist Church History (1993), which was written as part of the 200th anniversary of churches in Danville, VA.
Posted by RSF at 10:03 PM No comments: 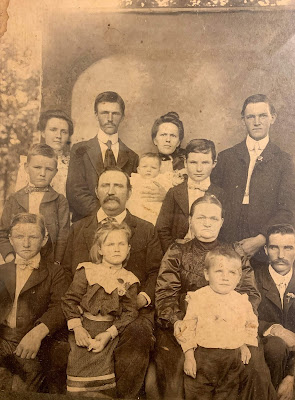 It appears that William Smith Brandon and then Dudley Wilson Brandon operated a general store at the west end of the main commercial block in Milton. This store is to the far left in the photograph.


James Hunter Brandon, Jr., operated a service station and cafe in what now is Milton Tire. See photograph.
Posted by RSF at 1:08 PM No comments:

Ivy Bluff: This Week in the Archives (December 2019)