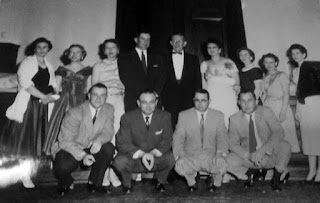 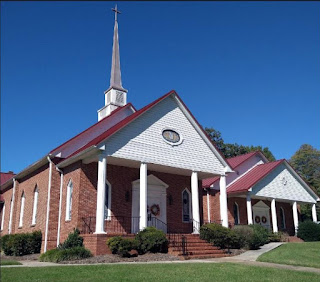 1900 US Hwy 158 West West Yanceyville, Caswell County, NC
Prospect United Methodist Church about three miles west of Yanceyville may have been an outgrowth of the Piney Grove Methodist Church that Starling Gunn is said to have built. Early buildings appear to have been built on land for which no deed was recorded and that may have been soon after the American Revolution. In 1850 Elijah Roberts gave some land to the congregation and in subsequent years additional land was given. The present church, originally a wooden structure but now brick veneered, was built in 1905 with an addition made in 1929. The earliest grave in the cemetery is dated 1876.
_____
Building Photographs
Cemetery on Cemetery Census
Cemetery on Find A Grave
Cemetery Photographs
Methodist Church History in Caswell County
_______________
The following is from In the Beginning - The Churches of Caswell County, which was published in 2001. The author is unknown:
We do not know the exact date the Prospect United Methodist Church was organized, but tradition has that it is the oldest church of the old Yanceyville Circuit, which included Prospect, Pelham, Bethel, Shady Grove, Yanceyville, and Locust Methodist churches. Early church histories date Prospect's origins as shortly after the Revolutionary War.
Prospect Church is thought to have originated from Piney Grove Methodist Church, which no longer exists. Starling Gunn established Piney Grove Church on what now is Murray Road just off the County Home Road. Gunn served in the Revolutionary War and purportedly witnessed the surrender of Cornwallis at Yorktown. Soon after the war Gunn moved to North Carolina and provided lodging to circuit riding preachers. He later donated land for the Piney Grove Church building.
Read more »
Posted by RSF at 3:31 PM No comments:

1980 NC Democrat Gubernatorial Primary: Caswell County
Jim Hunt's decision to run for a second term for NC Governor led to a challenge from former Democratic governor Robert W. Scott, but Hunt easily defeated the former governor in the Democratic primary.
Caswell County Democrats were split.
It is too close to call, said W. Osmond Smith II, Hunt's Caswell campaign manager.
But George Daniel, Scott's Caswell chairman said: "Its been uphill, but there's a lot of undecided votes out there. Scott's done well switching his tactics . . . to what Bob Scott will do."
R. L. Satterfield, owner of Yanceyville Auto Sales, said: "Bob Scott's well known in this county and his daddy before him . . . but I'm leaning toward Hunt."
Helen Little, a Hunt appointee to the State Transportation Board, said she was concerned that "a lot of Hunt's people feel he's going to win and (will) stay home."
Lee Farmer, the county Democratic Party chairman said, "I detect a deterioration in Gov. Hunt's position."
A Hunt gaffe during a recent campaign trip didn't help, Farmer and others said. Hunt had huddled with Smith and key workers in Smith's Northwestern Bank Building office while more than 125 Democrats cooled their heels nearby.
Farmer said: "It was an error. It looked bad."
Source: The News and Observer (Raleigh, North Carolina, 24 April 1980, Thursday, Page 21.
Photograph: Helen Little with unidentified man. Query whether it is the NC Secretary of Transportation. The event purportedly was either the funding for (or the completion of) straightening Highway 86 running southeast from Yanceyville. This was a major project for Helen Little. 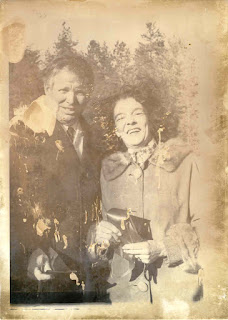