The history of stagecoach lines and routes is Caswell County, North Carolina, is incomplete. Few records are known. Here we share what has been found. Research continues. 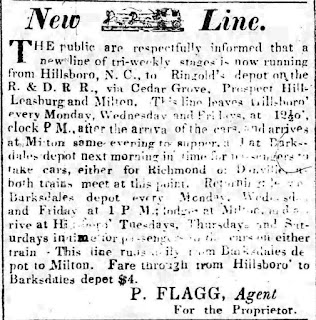 The public are respectfully informed that a new line of tri-weekly stages is now running from Hillsboro, N.C., to Ringold's depot on the R. and D.R.R., via Cedar Grove, Prospect Hill, Leasburg and Milton. This line leaves Hillsboro every Monday, Wednesday and Fridays, at 12 1/2 o'clock P.M., after the arrival of the cars, and arrives at Milton same evening to supper, and at Barksdales depot next morning in time for passengers to take cars, either for Richmond or Danville, as both trains meet at this point.

Dowdytown Was a Rough Place Back in the Day

Police today were investigating the death of Alexander Henderson, a 24-year-old negro who succumbed yesterday morning in Providence Hospital to a gun shot wound in the leg inflicted September 26th, the injury becoming progressively worse until a final operation for the amputation of the leg proved fatal.

The negro dies without making an ante mortem statement, but police today were in possession of the name of the man who, the negro is said to have stated, shot him one night in Dowdytown. City Coroner J. E. Taylor was also pursuing an inquiry today. The only reference to the man who shot Henderson was made to hospital attendants whose word now is relied upon to form the basis of whatever process follows. He was quoted as saying he was shot at Dowdytown. The case was not reported to the authorities chiefly because of the intermittent visits which Henderson made to the hospital.

The wounded man was brought to the hospital on the night of September 26th with a bullet wound above the knee. The bullet had ranged down, however, and was removed from the muscles of the calf. Henderson seemed to make progress and left the institution on September 30.

On October 21st he was again brought to the hospital for treatment. The leg did not appear to be mending and he was suffering hemorrhages from the wound. He continued to take treatment until October 26th. Then he left the institution to be brought back on December 1st, this time in serious condition. He was in weakened condition and there were symptoms of gangrene. The immediate effort was to build him up for the shock of an operation for the removal of the limb. This was undertaken on Sunday evening by Dr. Julian Robinson who was called in the last desperate resort to save his life with small chance of his recovery because of his general weakness and the condition of his system.

While local hospitals have been more prompt of recent weeks in reporting all violent injury admissions to the police, the local authorities today still pointed to any mandatory provision in the city ordinances which would compel such action by the hospitals.

Chief of Police J. H. Martin said today that there had been no mystery about the shooting and that it had been investigated promptly at the time by Sheriff Gatewood, of Caswell County, also by local police. The version at the time is that he had a quarrel with John Dowdy on the night of the shooting, that the negro left the scene and returned later with a shot gun whereupon Dowdy fearing that the negro was about to shoot him, fired and wounded him in the leg. Dowdy is said to have given this explanation of the shooting at the time.

Role of the Historian

Not all Caswell County history is pleasant. Do we ignore facts because some deem them offensive? What is the job of the historian? Should not all aspects of Caswell County's history be available for analysis, critique, and review? Is this not what historians do? Are not today's news events tomorrow's history? Where should the line be drawn? Who draws that line?
_______________ 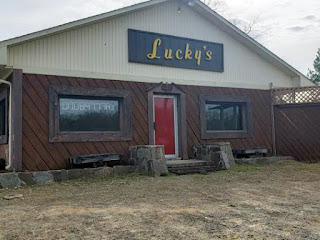 Edward Lee said he had no sooner stepped out of the bathroom at Lucky's than he saw a man hitting a woman in the face. A regular patron of the bar — located just across the state line in Providence, North Carolina — Lee recognized many of the faces there. But not this pair.

"It was some people out of town," he said, pointing at the bar — a dark brown wooden structure with multiple doors and windows along 268 Gatewood Road — from a corner of its gravel parking lot Wednesday morning. "I told him he needed to leave."

The man then followed him across the bar. It was shortly before 1:30 a.m. and Lee had just walked past the bar and was near the kitchen when a pool cue smashed into his head. The man then grabbed a beer bottle and slammed it into Lee and several others. That's when the man's three friends jumped in, Lee said, and a brawl broke out.

Shots soon rang out, Lee said, with a bullet hitting him and others. At some point, Lee added, more shots rang out. He is unsure how much time passed between the two rounds of gunfire. But he does know the man he blamed for starting the fight dropped to the floor next to the pool tables.

The Caswell County Sheriff's Office has since charged Damon Dewayne Lee, 42, of Danville, with second-degree murder in relation to the Lucky's shooting incident. He is being held in the Caswell County Detention Center without bond.

The sheriff's office would not return repeated requests by the Register & Bee to confirm whether other people had been shot. Lee said said he and another man had also been shot, with the other man being flown by helicopter to Carilion Roanoke Memorial Hospital. "Look," Lee said, pulling up his shirt to show a bloody wound on his lower back. "He shot me!" By late Wednesday morning, Lucky's had reopened and an employee was clearing the floor of crime scene tape and glass shards from broken beer bottles. He did not want to be named for this story. "I've been here 20 years, this is the first time someone was shooting like this," he said.

George Williamson was appointed by the court to administer the estate of Azariah Graves. The above notice was published in The Rubicon (Yanceyville, North Carolina), 16 May 1840, Saturday, Page 3.

One heir of James Sheppard, Nancy Sheppard, did not live in North Carolina and was beyond the jurisdiction of the court. This required the notice that was published in The Rubicon newspaper multiple times. After complying with the statutory notice requirements the court would have the authority to adjudicate the rights of Nancey Sheppard in absentia (without her making a court appearance).

IN MEMORY OF MY DEAR FRIEND, JOHN MCKINNEY

John went to the hospital on July 20. From his conversations with folks and friends he did not believe he would live through the operation.

I helped him thresh wheat the day before he went to the hospital and he told me the wheat would never do him any good, and I felt that it wouldn't at the time. (How awful is the shock of loosing [sic] a good neighbor.)


I went to see him Sunday before he died on Friday. He was feeling good, I thought. Little did I think I had bade his good-bye for the last time.

I was working near his home when the word came that John could not live much longer. I looked out at his good home with tears in my eyes and said: "Oh John, how can we live without you"? I hurried to his bedside and found his good family around his bed crying and praying, I imagine for his recovery.

John was never united with any church but believed only in Salvation by Grace as preached by the Primitive Baptist Church.

I lived less than a mile of John all my live [sic], 49 years; and I never lived by a better neighbor and friend. I can't recall of ever hearing his use an oath and neither one of his children.

John had a good family for which we give him and his wife credit.

The foregoing was found in the Chandler Family Bible and shared by Tyler James Chandler. The subject is John Allen McKinney (1877-1937), who married Minnie Alice Rudd (1887-1965), and had at least ten children. The author is James Yancey Chandler (1887-1938), who died the next year in a tragic motor vehicle accident near Hogan's Creek bridge on the road between Yanceyville, NC, and Danville, VA.
_______________