The first US Post Office at Anderson was named Anderson's Store. It opened December 13, 1814, with Quinton Anderson (1783-1854) as postmaster. In 1892 the name was simplified to Anderson, with George Anderson [probably George Andrew Anderson (1869-1945)) as postmaster. The post office closed in 1906, with mail service transferred to Union Ridge in Alamance County.

M. Q. Plumblee stated that this post office (and the store in which it was housed) was located at or near the intersection of what now is Highway 62 and Baynes Road (S.R.-1001).

"Anderson's Store was one of the early ones built in Anderson Township. It was located across the road from the Quinton Anderson residence. The west end of the present James W. Tate's residence is located over a part of the old store site." 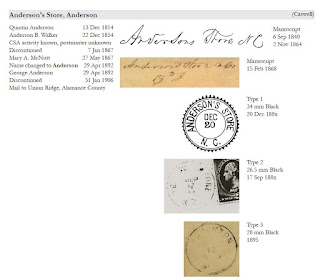