When the wintry winds blow and the snow falls in the month of February, what could be more appealing than a big plate of steaming hot pancakes for breakfast, lathered with butter and covered with molasses? Not the usual kind of molasses you find n a store, mind you, but the rich, dark, homemade kind -- that kind made by the Waymon Totten family of Yanceyville.

The growing of sugar cane for the making of molasses has been known for centuries, and the Totten family uses that knowledge to the fullest. Every few years, the whole family -- Waymon and Beatrice, and sons Tommy, Henry, Otis, Robert, Waymon and J. C. -- gather together for the pleasant ritual of boiling down cane sap to make the molasses.

The process is a simple one, but one that takes considerable time from start to finish. Beginning in mid-fall with a cane field grown on the family's farm, it takes at least seven or eight hours for the process to be completed.
Read more »
Posted by RSF at 2:46 PM No comments:

Frogsboro is an unincorporated community in Caswell County, North Carolina. However, the origin of the name "Frogsboro" was long a mystery. Many speculated, and reasonably so, that it had something to do with frogs, but until recently the full story was not known.

"There was a frog pond on Warren Wade's farm that in later years was enlarged. However, some viewed it as an over-size mud hole! One could hear the bull frogs croaking, often resulting in some large and tasty frog legs. The frog pond remains today, across the highway from the Old Lea Bethel Baptist Church.

"This is what I was told many times by the older men that lived around Frogsboro. Back in the day, I enjoyed sitting around and listening to them talk: Floyd Harris; Warren Wade; Earnest Rudd; Speck Thaxton; Tom Fitch; and Shorty Hightower (my father). Those men knew a lot of Caswell County history."

Courthouse Fire Made Many Heroes

"The County History: Courthouse Fire Made Many Heroes" by Joshua Durham

The old Caswell County courthouse stands like a silent sentinel, overlooking the public square in Yanceyville. Built just prior to the Civil War by free and slave labor, the old structure has been the scene of many important and intriguing trials, and to most residents of Caswell County, stands as a reminder of the many-faceted history of Caswell.

But, without the hard and fast work of a few courageous men in 1952, the old courthouse could have been lost forever, the victim of a flash fire!

The morning of March 13, 1952 dawned cool and clear, and people went about their business in Yanceyville as usual, not suspecting that the day was going to be one for the history books.

Around ten o'clock that morning someone spotted a small column of smoke drifting from under the eave of the courthouse, on the southeast corner of the roof. This small column soon turned into a billowing cloud of thick, dark smoke. A call was put in for the Yanceyville volunteer fire department, then the only such department in the county, and firemen soon arrived on the scene.

An attempt was made to enter the attic of the courthouse through a doorway located at the top of the winding staircase in the front of the building, but without modern breathing apparatus, the firemen were forced back down.

In 1940 the Caswell County Land Use Planning Commission cooperated with the United States Bureau of Agricultural Economics in a "reconnaissance survey" of neighborhoods and communities in the county as the first step in discovering groupings of rural people which would provide the basis for the organization of community land use planning. By on the spot observations and by informal interviews it was discovered that there were forty nine fairly well defined large communities. These were determined in some cases by voting districts, consolidated school districts, and the topography of the area.

The communities were Anderson, Cobb's School, Dan River, Hightowers, Leasburg, Milton, Pelham, Stoney Creek, and Yanceyville. There were, of course, a great many more. At least forty-five places with their own distinctive names can be identified today on a map. 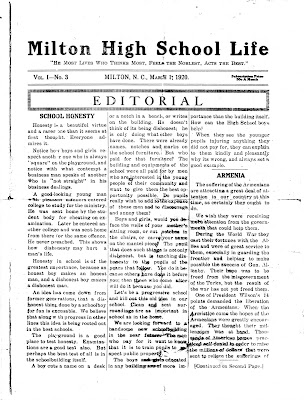 Note the possibility that the Editor, Graves Satterfield, is Mary Graves Satterfield (1902-1955), who married Waller Rhodes Morton. She apparently came by the name Graves from her maternal grandmother, Mary John Graves (1849-1962). And, she had Graves ancestors on both the maternal and paternal sides of her family. She is a second-great granddaughter of Bartlett Yancey, Jr.

John A. Tucker, Assistant Editor, most likely is John Archibald Tucker (1903-1970), a Caswell County lawyer who never married, became ill and destitute, and spent part of his last years in the Caswell County Home. Like Mary Graves Satterfield, he also was a Graves descendant. His mother is Dora Belle Graves (1867-1918).

James T. Holt, Business Manager, probably is James Thomas Holt (1899-1998). He is the son of Calvin Lea Holt and Lucy Jane Dodson Holt, and had a long teaching career. 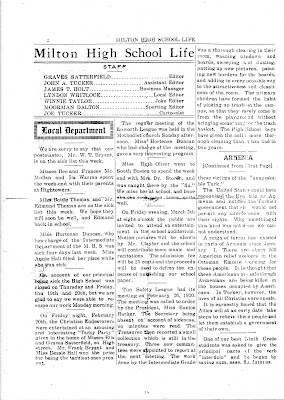