For decades Caswell County secondary roads/streets were identified by road number only. For various reasons, including providing better information for public services (such as first responders), names were added to these roads and streets. Some had been informally called by these names before official designation.

The official name of a secondary road is first established at the time of addition to the State Highway System. If a road was not added by petition (such as the original roads of 1931 and additions to the map in 1944), they are considered to have no name unless a name was submitted on the addition form.
_______________

"The secondary road system within a county for the purpose of this subchapter consists of those roads maintained by the NCDOT that do not carry "N.C." or "U.S." numbers and are outside the boundary of any incorporated municipality."

There are four categories:

A. Principal County Routes - These routes serve as the backbone of the rural transportation network within a county. Their major purpose is to move local traffic to community and recreational centers, shopping and industrial areas, to urban areas within the county and to connect together the other secondary roads with the primary highway system. In addition, they serve abutting residential, farming, business and industrial property.

B. County Roads - These roads have as their primary purpose serving abutting residential, farming, business, and industrial use. They also carry small to moderate volumes of traffic moving to the principal county routes and the primary highway system. Their dual function of serving traffic and abutting property is variable depending upon their importance as through route or connecting link.

C. Subdivision Streets - A subdivision street is considered to be a street or road which has been dedicated to the public to provide ingress and egress to lots or parcels which have been laid out for the purpose of providing home sites by a person or firm hoping to profit by the sale of such parcels. These lots or parcels are of insufficient size to be used primarily for farming purposes. A subdivision street is primarily for the use and convenience of the abutting property owners and not the general traveling public.

D. Collector Roads - Roads that channel traffic in subdivisions from side roads. They also provide access from other state maintained roads.
_______________

§ 153A-239.1. Naming roads and assigning street numbers in unincorporated areas for counties.

(a) A county may by ordinance name or rename any road within the county and not within a city, and may pursuant to a procedure established by ordinance assign or reassign street numbers for use on such a road. In naming or renaming a road, a county may not:

(2) Change the number assigned to the road by the Board of Transportation, but may give the road a name in addition to its number; or The road is named for William Marshall Graves (1865-1941), who missed being born into slavery by one month. His parents, Bural and Henrietta Graves were slaves (owned by the Graves family of Caswell County). Marshall married Maggie Elizabeth Graves, and the couple had thirteen children.

In 1907 Marshall purchased 305 acres of land from Barzillai Shuford Graves. He and his sons cleared the land and cut timber to build a house (erected in 1909). The children provided the labor for the many acres of crops: tobacco, corn, and wheat. The property also supported the usual farm animals. In 1917 Marshall purchased a sawmill. The business enterprise was owned and operated by Marshall and four sons: Albert, Gabriel, Thomas, and George (each having a one-fifth interest, and each assigned specific responsibilities for its operation). This sawmill provided timber for the Bank of Yanceyville built in 1922, for the houses Fred and Walter Harrelson in Yanceyville, the Stokes family in the Cobb Community, homes in Alamance County, and four homes on his farm. The sawmill also provided the lumber for all the bridges on Highway 62 South from Yanceyville to the Alamance County line.

Marshall Graves was long associated with Graves Chapel Baptist Church, serving as a deacon for thirty years. He rests in the church cemetery, with his wife and many of his children.
_______________

What father and son each have a North Carolina secondary road in Caswell County named for them?

Henry Thomas Graves was licensed to preach in 1924 and ordained in 1933. He preached regularly at Sellars School in the early days of his ministry. He began to pastor the Olive Grove Baptist Church in 1948.

All children listed below were born in North Carolina (probably in Caswell County):

Gentlemen's Ridge Road (S.R.-1333) is a dead-end road that runs north from Law Road (S.R.-1341) in northwest Caswell County, North Carolina. Other than the obvious (that gentlemen lived along the ridge), what is the source of the name?

One person who lived on this road and probably owned all the surrounding land is General Azariah Graves (1768-1850).

Many such landscaped settings may still be seen in the county. Others which disappeared are remembered, however. The "Milton News" of June 8, 1916, commented on a particularly interesting site on "Gentleman's Ridge" in the western part of the county near Ashland. A mammoth oak tree, 35 feet around at the ground, marked the site of the ante-bellum home of Azariah Graves.

Graves was said to have "displayed his love of the beautiful by laying off the grounds symmetrically and beautifying them by planting lovely flowers and ornamental shrubs everywhere around them." In his work Graves created a number of especially attractive settings. One of the most striking and best remembered things that he did, however, was to plant boxwoods in the shape of a large perfect heart. "Squarely across this big heart Mr. Graves spelled his name 'AZARIAH GRAVES' in large letters in evergreen boxwoods, and directly at the apex of this big heart was the open door of Mr. Graves' palatial and hospitable home." The house was burned about 1899 but some of the boxwoods are still living.

East of Yanceyville, North Carolina, South Gatewood Road (S.R. 1780) runs southeasterly off Highway 86/158. It is named for artist and Caswell County native Maud Florance Gatewood (1934-2004) who built a house at the end of the road.

The road now is extended and crosses Country Line Creek. The substantial bridge across the creek must have been constructed by the State of North Carolina. This is part of old Highway 86/158.
_______________

The area along Highway 86 between the Walters Mill Road (S.R.-1503) and the Virginia line unofficially has been called "Gatewood." Presumably this is due to the Gatewood family that lived/lives in the area, beginning with Dudley Gatewood (1747-1836) who hosted a visit by President George Washington in 1791.
_______________

James Tazwell Law, settled in Caswell County around 1860 in the area of the Bethel Church community on the Park Springs road. It is reported that Taz was a farmer and carpenter and either built or help build homes in the area. 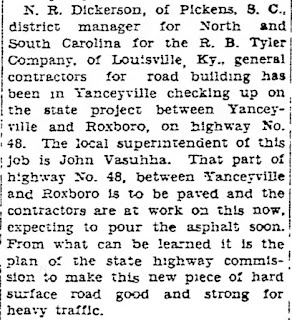