Over the years, Caswell County, North Carolina, has been part of and divided into various geographic, military, and political areas. These are referred to without explanation in various records (such as census and tax records) and may be confusing. Set forth below is a summary of these areas.

Each district was required to provide to the State of North Carolina a brigade of militia under the command of a brigadier general. Each county supplied a regiment; with regiments broken down into various companies.

Now, when you see a reference to Caswell County being in the Hillsborough District, you will understand why.

The legislation creating Caswell County authorized a poll tax of two shillings to be levied on each taxable person in the county (the funds to be used to build a courthouse, prison, and stocks). The sheriff was empowered to collect this tax.

For purposes of tax collection and other matters (including appointing constables and patrollers), Caswell County established eight internal districts: 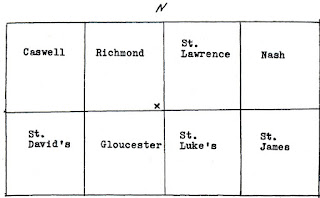 The "X" in the above diagram represents the county courthouse location at Leasburg.2

In 1868 North Carolina adopted a new state constitution that enacted a system of county townships, thus abandoning the district structure is use for almost a century.3  Caswell County's four districts were replaced by the following nine townships: 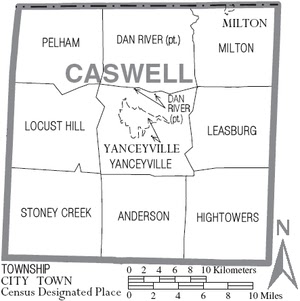 1 This body in addition to being a court of limited jurisdiction also functioned as the county's executive branch, much as the Board of County Commissioners does today.

3 The new constitution also abolished the Court of Pleas and Quarter Sessions (upon which county justices served), replacing it with the now-familiar county board of commissioners.