Thomas Day: Behind the Veneer

The N.C. Museum of History in Raleigh has the nation’s largest collection of furniture made by Thomas Day, a free man of color who owned and operated one of North Carolina’s largest cabinet shops prior to the Civil War. On Saturday, May 22, the museum will open Behind the Veneer: Thomas Day, Master Cabinetmaker, a major exhibit showcasing approximately 70 pieces of furniture crafted by this accomplished artisan and entrepreneur from Milton, Caswell County. This 6,000-square-foot exhibit also explores the extraordinary story of a man who succeeded and flourished despite shrinking freedoms for free people of color in antebellum North Carolina.

Raleigh, N.C. — One hundred and fifty years after his death, the outstanding furniture and architectural craftsmanship of Thomas Day is the focus of a special exhibit at the North Carolina Museum of History in Raleigh. The story behind this free man of color is as intriguing as his intricate carvings themselves. Day was born in 1801 in Virginia into a family that had been free African Americans for several generations. Both Thomas and his older brother, John Day Jr., were well educated. The family moved to North Carolina when he was 16 just before Virginia imposed stricter laws on people of color. Following the career of their father, the Day brothers opened a cabinetmaking business in Milton, N.C. By 1825 John had returned to Virginia and Thomas Day was now sole proprietor of the successful furniture making shop that catered to wealthy whites. An 1827 ad that ran in the Milton Gazette and Roanoke Advertiser read, “Thomas Day, Cabinet Maker, Returns his thanks for patronage he has received, and wishes to inform his friends and the public that he has on hand, and intends keeping, a handsome supply of mahogany, Walnut and Stained Furniture, the most fashionable and common bed steads, and which he would be glad to sell very low. All orders in his line, in Repairing, Varnishing, and will be thankfully received and punctually attended to.”

By the 1850s Day followed a basic principle of successful businesses when he expanded to fill another need of his customers. His innovative curling line and classical style expanded from rocking chair arms and other pieces of furniture to classical architectural elements such as mantels, center stair cases and window casings. His customer base broadened to include the University of North Carolina in Chapel Hill where he provided the interior woodwork for one of the original buildings. Quality of workmanship and an innate talent for design led to Day becoming the most successful cabinetmaker in North Carolina and one of the founders of the South’s furniture industry. As his business prospered he purchased Union Tavern in Milton and added a workshop next to the family home. While his position as an economic leader in the community was solid, his social position was very unusual for that era. In his shop, there was symmetry and balance in the product and in the workforce. He was a black man who owned slaves and also employed other free blacks and white men even though he was considered beneath them socially. After much negotiation, he donated pews he built to the Milton Presbyterian Church with the stipulation that he and his wife, Aquilla, and their children could sit in the white section when they worshiped. And the Day family pew was on the front row. 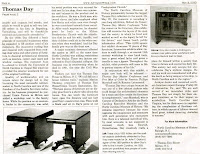 A major economic downturn affected the nation in 1857 at the same time North Carolina was adding restrictions for free blacks. These two factors contributed to Day’s financial collapse. His business was in receivership when he died in 1861, the year the Civil War began. Visitors can tour the Thomas Day House in Milton, N.C. “We call Milton a house without walls,” explains Marion Thomas, president of Thomas Day House/Union Tavern Restoration, Inc. “Thirteen pieces of furniture are on display plus there’s a short video about the house. You can touch the furniture here; open the drawers and see how good Day’s construction was. Then walk a block and sit in Day’s pews at our Presbyterian Church.”

The North Carolina Museum of History permanently houses the largest Thomas Day collection in the world. On May 22, the museum is unveiling a year-long exhibition, Behind the Veneer: Thomas Day, Master Craftsman. “Like the veneer on his furniture, this exhibition will examine the layers of the man and the society in which he lived and worked as well as the legacy he left for the future,” said Susan Lamb, public information officer. “This 6,000 square foot exhibit showcases 70 pieces of Day furniture. Interactive exhibits allow visitors to walk through a re-created 19th century workshop to view hand tools, turn a great wheel lathe and press a treadle to run a jigsaw. Throughout the exhibit, video portraits will come to life to portray aspects of his life.” In conjunction with this exhibit, a major new book will be released — Thomas Day Master Craftsman and Free Man of Color by Patricia Phillips Marshall and Jo Ramsey Leimenstol.

“Thomas Day was unique because he was one of a few cabinet makers who could design the architectural elements for a room and then create the furniture to complement it,” says Marshall, who is Curator of Decorative Arts for the North Carolina Executive Mansion and the North Carolina Museum of History. “He remains important because his story captures the imagination and resonates with each generation who encounters him. Here is a talented individual who, by most accounts, is not supposed to succeed, much less flourish. Nevertheless, Day creatively crafts a place for himself within a society that tries to dictate and control his daily life. This society not only accepts but also celebrates Day’s stylistic designs. He and his work are remembered well after his death as being unique to his shop, to North Carolina and to the region.”

Antique dealer and renowned southern furniture expert Sumpter Priddy III of Alexandria, Va., said “We are well served if we remember John and Thomas Day not simply for their elegant furniture, or for their impact on antebellum North Carolina and Virginia, but for their savvy in negotiating the complexities of Southern culture, in which anyone of African descent faced great, indeed daunting, obstacles to success.”

Permalink
Posted by RSF at 2:03 PM