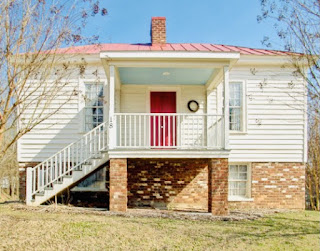 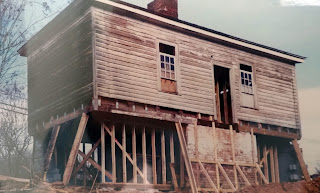 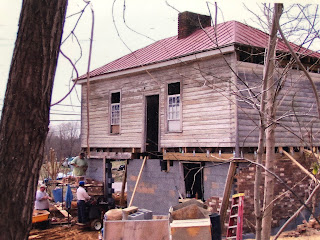 We rebuilt the foundation by replacing the inside two rows of brick with cinder block for strength and then hand selected from the original bricks to create the original Flemish bond pattern and re-pointed them on the outside of the cinder block.  Most likely the original bricks were made by Mr. John Wooding's brickyard that was just down the block.  One of the special finds we made from handling each brick was one that had the finger prints from its maker.  We donated it to the Thomas Day House since it represented one of the many merchant class products made in the town.

To correct the ceiling height and bring it up to code we dug down 2 feet and had concrete laid with piping to make plumbing for a kitchen and bathroom and for gas in the kitchen fireplace.  We laid wooden flooring and stone decorated laminate to cover the area.

A wall foundation and floor was added under what was formerly a 1930's addition of a screened porch.   The screened porch was recreated on the second level.  The lower enclosed area would become our laundry room and utility room.  Following these necessary updates, we added electricity with AC and heating units.  This action involved cutting two 18 X 18 inch solid beams for duct work.  We saved one 3 foot section of the beam to be a bench in the first floor hall.

We moved to a log cabin on Hyco Lake while the restoration was going on.  During that time we fell in love with many of Milton's citizens who checked in almost daily to see how the work was coming along.  Many lunches at the Milton Tire Company and dinners at Aunt Millie's were spent listening to the stories of residents whose families had lived there for generations and others who had left to see the world and then came back to settle in for life.

Once the first level was stable and a staircase for access to the second level had been created, we began the demolition and removal of the plaster walls.  We hired only North Carolinian craftsmen to bring the house up to modern day coding.  Plumbing, electrical, insulation, painting both inside and out. Using the ghost lines on the building and old photos,  we recreated the two porches.  There were several spots near the upper level fireplaces that we had to replace with age-appropriate heart of pine wood where the fire embers burnt  through the floors. Our newly created kitchen had custom cabinets made by a very talented Amish woodworker from Yanceyville. Every inch of space was used to create a more functional, workable interior.

Outside the cottage we had cut through the kudzu and replaced it with grass and simple landscaping.  A brick walkway was laid from the downstairs door into the newly created driveway.  Finally, a septic field and tank were installed to meet county codes. 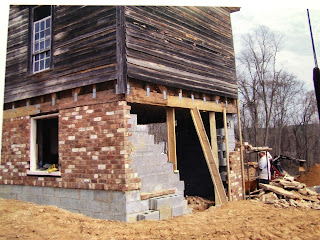 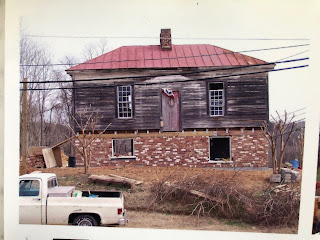 Christmas 2005 we spent our first nights at the Oliver House. On Christmas Eve we walked up Broad Street following the luminaries to the Milton Presbyterian Church for a candlelight ceremony.  We sat on seats made by the now famous Thomas Day and listened to the beautiful voices from the choir.  What a wonderful piece of history we have played a part in.

Since we were not full time residents of Milton, we eventually started to rent out the cottage to VIR racers and to locals who were having special events.  We had many repeat visitors and in May 2006 the cottage was invited to be on the Historic Homes of Milton.  One of the guests that tour day described how she was born in the cottage!

The most favorite seasonal spot in the Oliver House was sitting on the back porch feeling the breeze from the creek and chatting with neighbors going by on the road.  But as time went on, we saw the need for a second bedroom and eventually closed it in.

Looking through the guest book and remembering back, we realized there were many people who loved this cottage and its special home-like feeling.  In 2016 we felt it was time to pass the Oliver House on to a new family that would create more memories and love Milton as we came to. 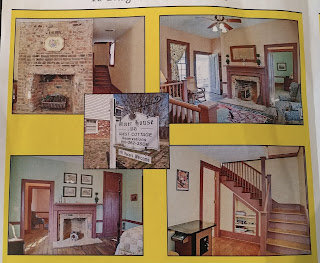 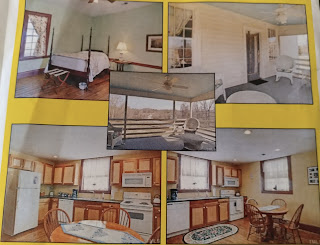 The Oliver House: One of four "raised cottage styles" in Milton, built for the merchant class.