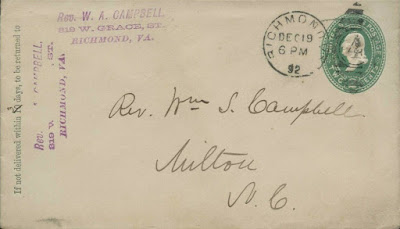 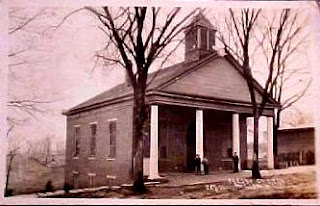 For a brief church history go to Milton Presbyterian Church
Click the image to see a larger version.

"Richmond, Va., June 10.—Rev. Dr. W. A. Campbell, the well-known Presbyterian minister and writer, died at his residence last night in this city. He had been in failing health since the early part of the year, but his condition was not considered alarming unit a few days ago.

"Dr. Campbell was a man of find character and unusual natural gifts. He had filled many important pastorates, and was for several years evangelist of the synod of Virginia; was for some time traveling agent of the Virginia Bible Society, and on the death last year of Mr. T. D. T. Walford became secretary of the society. He was also secretary of the peace conference. Dr. Campbell leaves a wife and five children."

"His first pastorate was in Gloucester County [VA], where he served for two years, resigning to accept a call to Mizpah Church here [Richmond, VA]. During his pastorate he organized and had charge of Fairfield Church, near the Mechanicsville Turnpike. He then went to Milton, N.C., where he organized two churches and erected two new church buildings during five years there."

They are both buried in Hollywood Cemetery [Richmond, VA].

They had three children: 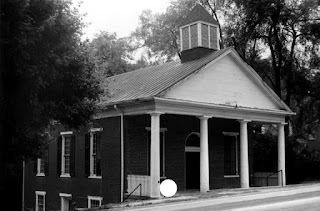 The Milton Presbyterian Church traces its origin to 1826 or perhaps a few years earlier. Baptist minister Rev. Abner Clopton took charge of the academy in Milton in 1821 and held services there. In 1823 Rev. D. A. Montgomery succeeded him, a Presbyterian who preached monthly for a year. A Ladies Fragment Society (sewing circle) was formed to raise money for a church. By selling jewelry, needlework, and other handicrafts they made, they soon had an impressive amount of money. In 1826 a small wooden church was erected near the gate to the local cemetery by W. A. Royster.

All who would pay $4 for a year's support of a minister were permitted to vote as to the denomination of the minister to be sought. The tally was 38 Presbyterians and 8 Episcopalians. The Rev. James W. Douglass of Murfreesboro was invited and arrived in March. On October 5, 1826, the Milton church was received by Orange Presbytery.

The congregation soon outgrew the small church building, and in 1837 the present brick structure was erected. It is a sturdy building of locally made brick and with large hand-hewn rafters and beams held by wooden pegs. As with most Milton churches burials are in Cedars Cemetery or elsewhere.

Several free blacks were members of the church and there was a balcony for them and slaves. Thomas Day, local free black cabinetmaker, was a member, but he wanted a place for himself and his wife on the main floor. He is said to have offered to make the pews and other furnishings for the church in return for the privilege of sitting wherever he chose. This was agreed to, and the work of his hands and shop may still be seen in the church. His pulpit is still pointed out to visitors. Rev. Nehemiah Henry Harding, a native of Maine, was pastor from 1835 until 1848. In 1838 he helped to establish the church in Yanceyville. He served both churches from then until 1848.

Both the above works are much more than rote transcriptions of Session Minutes. They provide a history of Milton and the Milton Presbyterian Church.