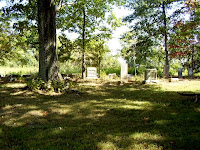 In 1840, some residents of southwestern Caswell County left the Yanceyville Baptist Church (Yanceyville, North Carolina) to from the Trinity Baptist Church, which was nearer their homes. Members also came from Wolf Island, Lick Fork, Dan River, Pleasant Grove, and other churches. William Pleasants was the first pastor; Calvin Graves, the first clerk; and Alexis Howard, the first treasurer. Alexis Howard, William Dupree, and John Stamps were elected deacons. Azariah Graves, Alexis Howard, and William Slade were trustees of the church property. Calvin Graves, William Dupree, and Alexis Howard were delegates to the Association held 1840 in Yanceyville. R. W. Lawson offered a site for church and school. In 1842, Zachariah Neal from Bethesda Presbyterian Church joined Trinity Baptist Church and applied for a license to preach, which he received in the fall of 1842.

The first Sunday School organized in this section of the state was at Trinity 10 April 1844, with twelve officers and teachers and forty pupils. Many slaves were members of Trinity Baptist Church.

For many years, Elias Dodson was Associational missionary. Dr. Wait, President of Wake Forest, preached for two weeks at Trinity Baptist Church in the fall of 1844. Many were added to the church. In 1845, Calvin Graves put on foot a move to build a Classical School for this section, and R. W. Lawson deeded a site that now is occupied by a Caswell County public school and is to revert to his estate when it ceases to be used as a school site. Resolutions and other procedures were gone through with, and the trustees were named as follows:

The school opened with J. J. James as principal and the church was used until the school building could be completed.

Calvin Graves resigned as clerk on the second Saturday in December 1847, giving as his reasons so frequent absences on account of professional business and public engagements. William Slade was selected clerk.

Joshua J. James served as pastor from 1840 until January 1, 1850, when he resigned on account of feeble health. Samuel Wait, D.D., President of Wake Forest College, was called as pastor but could not take up the work. He sent John H. Lacy, who served until the fall of 1853, when Thomas Tobey of Raleigh was called by Trinity and Yanceyville at a salary of $800 per year. At this time, the church had about 200 members.

The first mention of a collection for Foreign Missions was when Azariah Graves made motion in May 1849 that pastor preach at next appointment on Missions and take a collection for same. The amount of @27.50 went to William Slade, who served as clerk until 1863.

In May 1859, Reverend Samuel G. Macon was called and served until December 1871 when Reverend J. H. Jones came. Reverend Jones served until 1880. No record in book from 1880 until 1904 when W. E. Apple was named clerk and Mr. Willson was pastor. There is a slip of paper in existence that reads as follows:

In August 1906, Mr. C. J. Yarbrough was made Church clerk. At the same meeting, James M. Shelton, C. J. Yarbrough, and T. Howard Slade were made trustees. Howard Slade, Loftin Lambert, and Woodfin Yarbrough were named delegates to Association to meet with Kerr's Chapel. Mr. O. A. Keller, called as pastor in 1907, served one year. Reverend. D. W. Overby was called in 1910 and served until 1922 when the church was without a pastor for a year.

The account just give is from notes found in A. Graves Thompson's desk. Family records show that Azariah Graves joined Lick Fork Church on the second Saturday in May 1824. If this were Gen. A. Graves he was 34 years of age. If it were his son, he was nine years old. There is also a notation that Ella Williams Graves (Mrs. George Thompson) and Mildred Franklin were baptized in the baptistry at the spring below the church on the 34d Saturday in Dec. 1864.

On the 5th of February 1840 Calvin Graves gave a Note of Obligation to William Slade, A. Howard, and A. Graves, Gen. Trustees, for one acre of land for building a church. On January 3rd. 1842, a deed of 1.18 acres and a right-of-way to "Meeting House Spring" situated northwest of the property was given to the same Trustees. The deed was duly registered in court on Feb. 15, 1842. Both of these papers are in existence. A. Graves Thompson was Clerk for some years when his family was young, and his son Azariah Graves Thompson, Jr., was baptized there about 1928. The entire family attended services there until the early 1930s when Reverend Worrell served as pastor. It was then that the Thompson children began to move from home for school and marriage, and Graves Thompson joined Locust Hill Methodist with his wife and other children who were always Methodist.

Ella Thompson Hobbs
From Heritage of Caswell County
By Permission

From a letter from Lelia Neal Essic dated October 6, 1998: Trinity Church was a wooden structure when I was growing up and to the right of it was a little wooden two room school house which is where I attended my first four years. A tree fell on the building and destroyed it, but consolidation was taking place at the same time and we were assigned to Bartlett Yancey. Where the school stood is not part of the graveyard. My first four years were very happy ones in that little school. We all walked, of course. My home was (and is) about a mile from school toward Rockingham County.
_______________

At one time the cemetery was referred to as the "Slade Cemetery" and more recently as the "Neal Cemetery". The lastest Neal burials actually occupy an area offset from the original graves. The property is owned by Bernie Melchert, who is of German descent. Bernie purchased the property about 30+ years ago, possibly from Robert Neal.
_______________