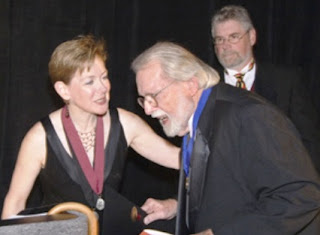 Richmond, Virginia, November 1, 2007 The Virginia Society of the American Institute of Architects will confer its highest award to a non-architect, the 2007 Architecture Medal for Virginia Service, on Tony P. Wrenn, Hon. AIA, of Danville. The award will be presented at the Society's Visions for Architecture Gala, on Friday, Nov. 9 at the Virginia State Capitol in the Patrick Henry Building in Richmond.

The Architecture Medal for Virginia Service is the Society's most prestigious public award, given to someone who is not an architect. The nominees' regional contributions are reviewed for their statewide impact. Efforts must be Virginia-based, serve as a model for other efforts and have statewide educational value. The length of service and type of activities of the nominee are considered. Only one Virginia Service medal can be presented annually. The award has been conferred 19 times, in the 23 years since it was first awarded in 1984. The first recipient was Carlisle Humelsine, Chairman of the Colonial Williamsburg Foundation. Other recipients have included Leslie Cheek, Jr., former Director of the Virginia Museum of Fine Arts and former Virginia Governor Gerald L. Baliles and former First Lady Jennie C. Baliles.

Wrenn's award cites his lifelong passion for architecture and appreciation for the built environment. The nomination recognizes, in particular, his contributions as an archivist, architectural historian, conservator and photographer. His career of more than 45 years has been dedicated to highlighting the importance of architecture. As Archivist for the National Trust for Historic Preservation, and for The American Institute of Architects (AIA), from which he retired in 1998, he worked not just to preserve the records of the organizations, and of preservationists and architects, but acted as an advisor on historic district legislation, the effects of historic preservation on real estate values, the value of the built environment culturally and economically, and the history of the architectural profession. He continues to write and lecture widely on architecture, the environment, and related topics. Among his projects were The Dranesville Tavern, Dranesville, Va., now owned by the Fairfax
County Park Authority. It was moved and preserved after it was threatened by highway widening. Wrenn brought archaeologists, architectural photographers, historians, and architectural draftsmen to work on the vernacular structure. The archaeological program used high-school-student volunteers, in an innovative program later broadcast internationally by the Voice of America. The Tavern was successfully moved, photographed and drawn for the Historic American Buildings Survey in the Library of Congress, entered in the National Register of Historic Places and designated a Virginia Historic Landmark.

His research on Woodlawn, Mt. Vernon, Va., a National Trust Property, has established it not just as the architecturally significant home of Lawrence Lewis and Eleanor Parke Custis, but as an important political, literary and civil rights site, stretching its importance from the era when George Washington gave the site to the Lewises as a wedding present in 1799, to the present. One occupant, Senator Oscar Underwood, appears in John Kennedy's book Profiles in Courage, and the Baptists and Quakers who purchased the plantation from the Lewis family, made the mansion a stop on the Underground Railroad. Wrenn believes it to have one of the longest, most diverse and most important histories of any of the early Virginia mansions.

Another particular interest was Robert Russa Moton School, Farmville, Va., a school for blacks built in 1939. It is undistinguished architecturally, but assumed national importance in 1951, after students there called a strike demanding better facilities. It was close to being demolished when, though it had been removed from the meeting agenda, the State Review Board in the Department of Historic Resources, Richmond, discussed its importance anyway. It was nominated to the National Register at a level of National Importance by unanimous approval. When the State Historic Preservation officer, for policy reasons, would not forward the nomination to Washington, Wrenn, the Review Board Chair and the Vice Chair personally forwarded it on behalf of the Review Board. It was quickly listed on the National Register. The 1951 strike led to a court case challenging Virginia's "Separate but Equal" laws. The court case became a part of Brown vs. Board of Education in which the U.S. Supreme Court struck down segregation. In the aftermath, Prince Edward County closed its schools, and an era of massive resistance began in the south. The academy movement to provide whites-only education also blossomed, both traceable to the Moton school building. The County planned in the 1980s to transfer the school to an owner who intended to demolish it, but promised to erect a marker noting its importance. Now preserved to serve as a Civil Rights Study Center, it is on the National Register, a Virginia Landmark, and a National Historic Landmark--a level of importance it shares with Mt. Vernon, Independence Hall and the White House.

Wrenn's interest reaches to the more recent past as well, in accordance with his belief that history and time are continuums making age only one determinant of importance, and often not the most important one. As early as 1967, he touted developments such as Reston and Hollin Hills in Fairfax County and Dulles Airport in Loudoun, as Virginia landmarks. Contemporary built environment continues to interest him as much as the historic built environment. While employed by the AIA, Wrenn worked with students from the School of Architecture at the University of Virginia in a summer intern program in the AIA Archives, and still works with the School of Architecture at Virginia Tech's International Archive of Women in Architecture, which has become internationally known and used as a source of information on, and repository of, records of women architects -- long an under-recorded and under-recognized architectural resource. He worked for many years as a Study Leader for Smithsonian Institution tours in the Commonwealth of Virginia, and writes a weekly column "In a Virginia Garden," now in its 17th year, for the Free Lance-Star newspaper in Fredericksburg.

A native of [Caswell County] North Carolina, Wrenn has resided in Virginia since 1963. He moved from Alexandria to Fredericksburg in 1976 and has recently moved to Danville. He is an honorary member of both The American Institute of Architects and AIA North Carolina, the highest honor these institutions can confer on a non-architect. Wrenn, whose books are nationally known, continues to write about and lecture on architecture.

Nominations for the Virginia Society awards are made by individual Society members, Society committees, Chapters of the Society, or the Society's Board of Directors. The winners are selected by an Honors Committee, which is made up of members of the Society who are members and Fellows, the highest membership category to which individual architects are advanced on merit, of The American Institute of Architects. The Virginia Society of the American Institute of Architects represents more than 2,000 Virginia architects. The 93-year-old Society is dedicated to advancing knowledge of the art and science of architecture among professionals and expanding awareness and appreciation of architecture among the general public. For more information, contact the Virginia Society at (804) 644-3041 or visit http://www.aiava.org.
Posted by RSF at 11:17 PM