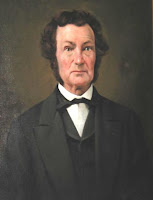 I transmit to you a few lines in which I expect to make mention of a good many things, which may be of but little Interest and concern to you, but since you came forth in such scolding terms in your letter because I did not obey all of your directions, I will endeavor to comply with at least one, namely to write you soon and; write you much, but do not draw the inference from this promise; that my disconnected and detached piece will contain any news of importance, you yourself too well know by experience that one at Colledge can scrape up but few things worth mentioning.2 Enough of this long preamble, All of us from Leasburg and Person, are well,3 With respect to myself I have enjoyed as good health or even better since I came here, than I have for some time, but with all my care and exercise I cannot gain any in weight It, I might say, is againt my nature, but when I reflect on many who are very corpulent and see how unfit they are oftentimes to study I have no reason to complain because I am not corpulent and fleshy.

I am sorry that your map and books were so injured, but it was out of my power to have fixed them any better, Inasmuch as I had neither room nor time, from the time that I came from Raleigh untill eleven o,clock at night I was as busy as I could be, settling accounts, fixing my room and your books Had I known that Mr Terry4was to carry your trunk before the servants were going to leave the Hill, I might have arrainged them in some better way, But that I was totally ignorant off untill I had packed your dry goods as well as I could in the saddle bags, you did not make mention in your letter whether you received your money, nor how much you did receive, but I suppose you found your monied affairs nearly correct, or else you would have said something about them, I believe I neglected5 to mention in my letter to you before, that Brother William sent three dollars and fifty cents by me to buy him a lexicon which I did not do, but one thing I done, I kept the money, so that he will have to charge father with it, as it was taken out of the store,6 Mr Bird paid me one dollar and 25¢

which he said was due you, I have gotten those books from him which you left in his care, I will try to send you all of your books which I do not immediatly stand in need off when ever I shall meet with a favourable opportunity, your note book, (as you call it) which you so much need I did not send you, I ransacked and hunted in every place expecting to find an old [triangle, circle, square] book, but when I came to think about it again I found out that you meant your blank book, and with respect to mustering I was disposed to take it in the way of a joke, so you may plainly see that I go to clear myself and make apologies, The faculty have not had the good luck to get a tutor yet although they are continually trying, I understood that they have offerred the office of a tutor to Mr Backhouse,7 but I have not heard whether he has accepted it or whether he is going to do it, your friend Bird is the same old seven and six, he can tell more anecdotes of great men and crack more dry jokes than any man I ever met with, he came to my room this evening and kept Jacob and myself laughing nearly till ten o,clock If I should have a touch of the hyppocondriae at any time hereafter, I believe I shall visit friend Bird and I am sure that I shall get well. Mr Richard Shepard and Thomas Dulany8 are on the hill yet, they both study as hard as any of the students, reading historys, theological books and c. and c., Both of them has some idea of studying law, Hawks9 our seccond mite man has returned to the hill again, but he is no more that playful and talkative fellow that he was before, I have never in all my life seen a person so hurt and so cast down as he is, on account of a mite, or even on any occassion, he makes but little exertions to stand first or even seccond, I will now enter upon a history of my class, I am aware however that I am making mention of several things about classes and students which will perhaps afford you but little satisfaction or interest, But because you have been a Tutor and perhaps have lively recollections of the conduct and abilities of the students, I take the liberty, The freshmen class consists (I believe) of about 16)10 and they are a rattling set as ever you came cross, I do not mean all of them, for11 there are exceptions almost to every rule, My class has increased in number and I might add in knowledge too, considerably, It consists of thirty four, and thirty one of them are regular on all the studies, Mr Cadwallerder Jones and John Taylor12

have been received in the sopomore class on regular standing, All of the glistered fellow[s]13 have returned except Mr Lock , There are about a dozen who are upon equal footing in geometry, on french I am inclined to think that James Dobbin stands first, on Latin and Greek they are about the same as when you were here, The Junior Class stand about the same except Calvin Jones who it is thought is failing a little and Jacob is gaining a ground a little You know my old complaint, that there is to much visiting, but I can assure you that it is ten times as worse as ever it was before, My expurgated Horace14 attractes a great many of the sopomores to find what odes are skiped and how far the lessen goes, Jacob has Williamson and Allen Jones nearly always about him, so that on the one hand there is a continual cry, Sol , Sol, and Gundy Gundy I want to see your expurgated Horace, on the other Shedrick, Jack, I wish you would show me how to commence this sum and likewise add by way of an ornament a few blessings upon John Bull's [James Phillips'] head, for giving such long and hard lessens, Upon the whole I believe it is best for it to be so, because I am inclined to forsake company more perhaps than I oug[ht to] be. At the beginning of this session Mr Hooper gave us a [sponsor] for to establish a temperate society,15 I believe that we are about to succeed, although there are a great many sneers and approbrious epithets thrown out againt it, there are16 about fifteen or twenty students who are going to join, for how long a time it is to be established I do not know, but I suspect it will continue for one year or through Colledge course, and then it will be renewed again, upon the whole the students do not drink half so much as they formerly did, yet there are more squibs17 and crakers fired every night than I have heard since I have been at this place, Jacob is a warm advocate in favour of a temperate society. After this long epistle (which if you can make18 out you must be a very good reader) I will win[d] up with something more solid, Surely it must be a source of great pleasure to hear that religion is gaining ground at Leasburg, would to God that the same was the case here, we would not hear so many oaths and profaness

if virtue and morality19 were regarded here, It is religion which distinguishes one man from another, which elevates one nation above another, But this place unfortunatly has never been famious for morality and virtu[e] and I am afraid that it never will, Write me as soon as you shall find an opportunity, tell William and Addison that I shall expect a letter from them,

2. Lea wrote "worth mentioning" on top of several unrecovered characters.

4. Possibly Benjamin F. Terry, who graduated in 1830 and became a physician. Terry , a member of the Dialectic Society, was from Pittsylvania County, VA, just north of Caswell County, NC, home of the Leas.

6. Presumably "Wm. Lea and Son," the store owned by Solomon's father in Leasburg.

7. John A. Backhouse from New Bern, NC, a Philanthropic Society member, graduated fourth in his class in 1830 and tutored the following year. Battle reports, "After being ordained a minister of the Gospel, he was deposed for conduct unbecoming a minister, and died early" (1:325). Finding competent tutors was a problem, according to Elisha Mitchell's 1828 report to the board of trustees (Battle 1:317).

8. Richard Muse Shepard (1813-44) of New Bern, NC, graduated in 1829 but may have remained in Chapel Hill to read law; he eventually became a lawyer in New Orleans. Thomas W. Dulaney of Onslow County, NC, also graduated in 1829, but sources are silent about his subsequent career. Both Shepard and Dulaney were members of the Philanthropic Society, having joined in 1826.

9. Cicero Stephens Hawks (d. 1868) of New Bern, NC, was a member of the Philanthropic Society. A "mite man" was a student earning first, second, or third honors. By the time Hawks graduated in 1830, he was a "third mite man," delivering a commencement speech on the "Influence of Rewards Bestowed on Distinguished Characters" (Battle 1:324). He eventually became bishop of the Protestant Episcopal Church in Missouri.

10. According to the University catalogue for 1829-30, the class of first-year students actually numbered 14.

11. Lea wrote "for" on top of several unrecovered characters.

12. Cadwallader Jones (1813-99) and John W. Taylor , both from Hillsborough, NC, joined the Philanthropic Society in 1828. Faculty minutes for August 1829 record that Jones , "whose examination at the close of the Freshman year was disapproved," passed it a few months later and was approved for admission to the sophomore class (3:108, UA). Jones graduated in 1832. He became a lawyer and served in the NC House of Commons (1840-42 and 1848-50), as a NC solicitor, and as a colonel in the Confederate army. He was a member of the board of trustees from 1840 to 1857. Taylor had been suspended for three months in May 1829 for indecent exposure. The faculty reinstated him before his suspension was up. He left the University in 1832, evidently without receiving a degree, and sources are silent about his later career.

13. "glistered fellows": students of any academic class who failed their examinations or coursework. They were required to make up their deficiencies before being readmitted to "regular" standing.

14. Quintus Horatius Flaccus, Opera [annotated by Benjamin Apthorp Gould] (Boston: Hilliard, Gray, Little and Wilkins, 1828). The study of Horace's odes and satires was required of all sophomores, and the 1831 University catalogue lists Gould's expurgated Horace as a textbook. An expurgated textbook is one that omits objectionable passages.

16. Lea wrote are on top of several unrecovered characters.