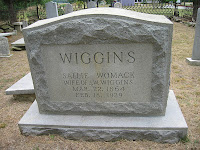 News was received here today of the death yesterday of Mrs. Sallie Womack Wiggins, of Yanceyville, N. C., prominent throughout that section who passed away in the Woman's Hospital in Baltimore where she had been taken for treatment.

Her remains are arriving today in Yanceyville and are to be buried in the old family square. Mrs. Wiggins was identified with the Barlett Yancey family for which Yanceyville was named. She was the sister of the late Mrs. John Bustard of this city.