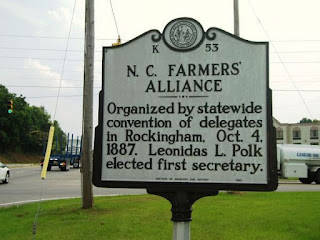 The prices that farmers received for their produce were low during the period after the war and the freight rates they had to pay were excessively high. Few farmers had any money left at the end of the year after their bills were paid, in fact many of them went deeper and deeper into debt.

In Texas in 1879 a group of people in similar circumstances formed the Farmers' State Alliance and it spread rapidly in the South, absorbing similar but smaller organizations. Created as a means of enabling rural people to help themselves financially and politically, the Farmers' State Alliance sponsored cooperative business enterprises as a means of reducing the cost of fertilizer, machinery, and other farm necessities. It also served as a means of channeling the political strength of its members. The Alliance entered North Carolina from the South and was organized on a county basis in Robeson, Rockingham, and Wake counties in 1887. Late that year the North Carolina Farmers' State Alliance was formed, and between March 20 and August 14, 1888, there were 17 alliances formed in Caswell County.

Apparently the first Alliance meeting in the county was held on May 7, 1888, at the courthouse. The Caswell News was adopted as the official organ of the body, and the masthead of the next issue read: The Caswell News, And Alliance Advocate. George Williamson was elected president of Caswell County Alliance No. 756. Other officials were R. S. Mitchell, vice president, F. A. Pierson, secretary, B. S. Graves, treasurer, T. H. Walker, lecturer, R. M. McCrary, assistant lecturer, and the Rev. C. A. G. Thomas, chaplain. At the organizational meeting delegates were present from Country Line, Eastland, Gentleman's Ridge, Hightower's, Leasburg, New Hope, Piney Grove, Pelham, Red House, Ridgeville, Stoney Creek, Oliver's, and Yanceyville Alliances.

"The Alliances in this county are composed of good people," the News related, "and they are doing all they can for the good of the order, regardless of the slurs of the many who are not eligible and who are using every effort to break it down by trying to influence good men to stay out of it." The paper went on to report that "some of the Alliances in the State are profiting by the trade system. They have trade committees appointed by the county Alliance, composed of one from each sub-Alliance, to wait on the merchants and receive bids. Let the Caswell County Alliance take the same course if they are seeking to better their condition and get their heads out of the lion's mouth."

In July the News reported the names of officers of thirteen Sub-Alliances that had recently been formed in the county:

The North Carolina Farmers' State Alliance, the Caswell County newspaper noted, had drawn up a series of "demands" and by publishing them appeared to support them all. The Alliance was strongly opposed to the policy of permitting private concerns to use convict labor. Prison labor was then used on farms, in factories, and on railroads, as well as elsewhere, under a lease system. The evils of the system were apparent; it was, in fact, a form of slavery. Nevertheless, by act of the General Assembly i 1909 (Public Laws, Ch. 591) it was directed that whenever any male person was convicted by the Superior Court of Caswell County and imprisonment in the county jail was a part of the punishment, the judge might direct that he be sentenced to work out his term on the county farm. The Board of County Commissioners was to provide for the safekeeping and guarding of prisoners, and grand juries were to visit the count farm and report at each term of court on the management and working of the prisoners.

The farm people were also eager to see changes made in the laws of the state so as to reduce the costs in litigation in minor causes and to enlarge the jurisdiction of Justices of the Peace. They were strongly opposed to the use of passes or free tickets on the railroads by public officials; the implication clearly was that such officials would favor the railroads. Finally, the Alliance program called for the establishment of a commission to regulate freight and tariff on the railroads of North Carolina.

Caswell sent delegates regularly for six years to the annual meetings of the State Alliance: George Williamson, Yanceyville, 1889; R. S. Mitchell, Ruffin, 1890; T. H. Walker, Pelham, 1891; N. T. Rainey, Estelle, 1892; M. Oliver, Yanceyville, 1893; and B. F. Stanfield, Leasburg, 1894. Thereafter the county ceased to be represented. The Alliance had become political in its orientation and with similar organizations joined forces with the Republicans. This union produced the period of Fusion Rule which prevailed from 1894 until 1900. Of this Caswell County clearly would have no part. Although the Alliance brought great good to many parts of the state and the nation, it seems to have had little effect in Caswell. In some areas it served to promote a class consciousness among the rural people, but all of Caswell was a rural county and the creation of a class consciousness was unnecessary. In some counties the Alliance was a means of education in agricultural methods, but Caswell was largely a tobacco-only county and there was little or nothing new to be learned about tobacco. In some paces the Alliance formed business agencies to provide fertilizer and other farm goods at or near cost; there is no evidence this was done in Caswell County, however. At the state level the Alliance played a significant role in bringing about the regulation of railroads. There were no railroads of any significance in Caswell County; and while fright rates undoubtedly were discussed, the problem was not a local one. In this area the, as in so many others, Caswell County simply did not fit the pattern and was unconcerned.
_______________

The Farmers’ Alliance, which originated in Texas and appeared in North Carolina in 1887, was an important agent of change in an era of political and social upheaval. The organization, national in scope, was private and nominally nonpartisan. According to John D. Hicks, pioneer of Alliance historiography, the national organization’s aims were fourfold: social, educational, financial, and political. In North Carolina the entanglements of the Alliance with politics were many, culminating with the defection of a sizable number of Alliance men to the Populist Party in 1892. Historian Lala Carr Steelman detailed the State Alliance’s attempts to win control of the Democratic Party, purify politics, elected farmers to office, and enact agrarian reforms.

The beginnings of the North Carolina Farmers’ Alliance date to an 1886 exchange of letters between S. B. Alexander and Leonidas L. Polk. Both men became Alliance leaders: Alexander as first president of the State Alliance and Polk as editor of the Progressive Farmer, official Alliance organ, and eventual president of the National Alliance. The organizational meeting of the State Alliance was held in Rockingham over two days, October 4-5, 1887. The convention drew up a constitution and appointed committees. Chosen as officers were: Alexander, president; Thaddeus Ivey, vice-president; Polk, secretary; J. D. Allen, treasurer; and Elias Carr, chairman of the executive committee.

It has not been determined where the delegates convened in Rockingham. Since the Farmers’ Alliance was a private organization, the session was probably not at the courthouse. Later meetings were held in Raleigh’s Metropolitan Hall, Fayetteville’s Williams Hall, and Asheville’s Opera House. The proceedings for the first session were not published. The minute book in the State Archives does not mention the site but does make reference to the “hall having been purged” and to the appointment of “Brother W. C. Cole,” a Richmond farmer, as doorkeeper. Newspaper accounts, including Polk’s in the Progressive Farmer, also failed to record the name of the hall.