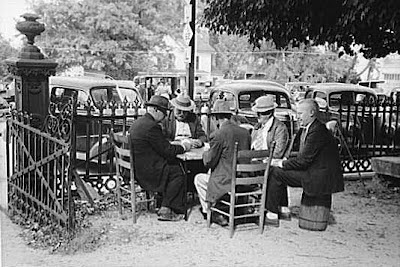 In the fall of 1941 Life magazine photographer Walter Sanders spent time in Caswell County, North Carolina, taking photographs for an upcoming article that used the Yanceyville Card Players as a theme to showcase the village of Yanceyville and surrounding Caswell County. He captured over 200 images. Only those published in the magazine are known to exist. The article ran in the 8 December 1941 Life magazine, but the events of 7 December 1941 forced the Life editors to cut the Yanceyville story short. General Douglas MacArthur was on the magazine's cover.
Posted by RSF at 10:52 PM