"Remembering the Face of Sacrifice" 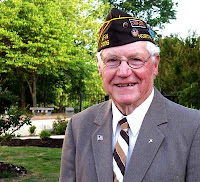 Yanceyville resident Benny Moore shared his memories of combat with a reverent crowd at Monday's Memorial Day Service held in the Veteran's Memorial Garden and Walkway at the Historic Courthouse.

Benny Moore never talked about the horrors of war when he first came home from combat in World War II. Now, after carrying those memories with him for more than 60 years, he is beginning to share them, hopeful that somehow it will allow others to better understand the sacrifices made by so many. "I want people to know the truth about things," Moore said after speaking at a Memorial Day service Monday evening. "It's real with real people with families and a lot of them never came home." Like many veterans, Moore is haunted by visions of things most of us have only seen portrayed on television or in the movies.

Joining the Army in 1943 at the age of 18, Moore was quickly sent through training, assigned to the 29th Infantry Division and loaded onto a ship to spend 14 days at sea en route to Europe, where he and his fellow soldiers would be forced to grow up quickly. "Some things happen I'll never understand," he told the reverent crowd Monday. "And some things I'll never forget." Moore's 29th Infantry Division landed on Normandy just after the beach had been taken in one of the bloodiest battles of the war. They were the first replacements sent in after the invasion, charged with replacing those soldiers who'd lost their lives in taking the beach and continuing the advance into France. It was not long before young Moore, who had entered the Army with little or no responsibilities, found himself charged with the ultimate task.

"It's an awful responsibility to be in the Army with 12 men under you and I was just a kid myself," Moore said quietly after Monday's service. With a far away look in his eyes, he recalled battles that were fought, comrades that had fallen and spoke of the nagging guilt that stays with a soldier for decades as they question every decision made, wondering if somehow they could have done something different to save the boys they fought beside.

"In combat, you might be a squad leader, but you don't put yourself above anyone else," Moore said. "You're all the same, you're all scared and you're all just trying to stay alive."

After more than 60 years, their names do not spring quickly to mind, but their faces and their stories have become a part of Moore. The face of one boy in particular will always haunt him. "I never even knew his full name," Moore said of a boy from Ohio, with a wife and baby girl back home, who once shared a foxhole with him. "We'd lost most of our platoon and had a bunch of replacements in and hadn't really gotten to know everybody yet."

Moore recalled the sound of the incoming shell and how the two soldiers had dropped to their knees. However it was not the sound of the shell that still echoes in his mind but the sound of the blood pouring from the Ohio boy's neck where he was hit by shrapnel. "He never made a sound, never a groan or a word, but the blood, it sounded just like somebody was pouring water out of a bucket," Moore confided sadly. "I will always regret not knowing that boy's full name so that maybe I could have gotten in touch with his family so I could have told them what happened."

Wounded once in St. Lo, France, Moore was finally taken out of combat after being wounded while trying to take Brese, France. Ironically, years earlier in World War I, his father had landed and fought in that same town. It would be 1947 before Moore had enough service points to come home, where he married Virginia Everett and settled in her hometown of Caswell County where he would work for 32 years at WW Grocery. He will tell you it was God who brought him through those years and that he has tried to lead a good Christian life since. He will also tell you that it is God who allowed him to be wounded and removed from combat before he became one of the soldiers who suffered and froze in the Battle of the Bulge.

Moore is proud of his service to his country although he is too humble to ever consider himself a hero. For six decades he has carried the physical and emotional scars of war - scars that will forever remain with him. Moore's service to his country is not yet over, although now he fights his battles on the homefront. An active member of the local VFW Post 7316, Moore works with his fellow veterans to advocate support for the troops currently serving as well as veterans of past wars and perhaps more importantly, he works to ensure that their sacrifices will be remembered even if their names are not.
Posted by RSF at 10:34 PM