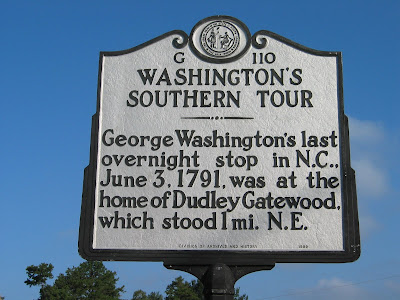 This historical marker* commemorates the visit of President George Washington to Caswell County, North Carolina, where he spent the night in the home of Dudley Gatewood (1747-1836). Where is that house now? Is it still in Caswell County? Did it burn? Was it demolished? More on the Gatewood House later; first, here is historian William Powell's description of Washington's Caswell County visit:

In the year that Caswell County was divided an event that should have been of considerable interest occurred although no local comment seems to have survived. George Washington had been on a tour of the South in the spring of 1791 for the purpose of becoming better acquainted with the character of the states and their problems and to gather information from well-informed persons who might provide information and advice on political matters. He went down the seaboard and returned through the backcountry.

The morning of June 3 at 4 o'clock, as was his custom, he set out from Guilford Court House on the way home. He had breakfast at Troublesome Ironworks in that part of Guilford County which is now Rockingham County. Washington's journal indicates that he was not well informed concerning the route he was to follow and he was obliged to ride twelve miles farther than he had intended. It must have been late in the day when he arrived at "one Gatewoods within two miles of Dix's ferry over the Dan at least 30 Miles from the Ironworks." He observed that "the Lands over which I passed this day were of various qualities and as I approached the Dan, were a good deal covered with pine."

One of the reasons for Washington's tour was to try to unite the country behind the young and struggling Federal government. Washington's personal charm and his acceptance as a national hero contributed greatly toward this end. In talking with Governor Alexander Martin, Washington noted in his journal: "I learnt with pleasure that opposition to the General Government, & the discontent of the people were subsiding fast--and that he [Governor Martin] should, so soon as he had received the Laws which he had written to the Secretary of State, issue his proclamation requiring all Officers & Members of the Government to take the Oaths prescribed by Law." This the governor must have done because before the Caswell County court on March 27, 1792, newly designated county officers appeared "and Took the Oaths appointed for Public Officers and also took the Federal Oath." Prior to that time only the state oath had been administered.

Having spent the night of June 3-4, 1791, in Caswell County, the north-western corner of which he had crossed, Washington noted that he "left Mr. Gatewoods about half after Six oclock--and between his house & the Ferry passed the line which divides the States of Virginia and No. Carolina." Safely across the line in his native state, the President dined at Nathanael Wilson's and then went on to Halifax to spend the night.

What happened to the Gatewood House in which George Washington spent the night in 1791? Presumably, if it remained in Caswell County the historical marker shown above would mark the spot. However, this marker is on Highway 86 just south of the Virginia state line and far from any residential structure of historical importance.

It appears that this famous Gatewood House was moved to Hillsborough, North Carolina, which is the county seat of Orange County! How did the people of Caswell County let this happen? That question remains unanswered; however following is some information on the Gatewood House in Hillsborough, which now operates as a restaurant!

George Washington slept at the Whit Gatewood House near Yanceyville on June 3, 1791, but if he returned to the site now, he would not find the frame dwelling. Instead, he would have to travel to Hillsborough, where the old house--now restored--has stood since 1978 (moved and renovated by James Freeland).

Washington's brief stop came during his famous "southern tour," which began in Philadelphia on March 21, 1791, and ended in mid-June after a visit to Maryland, Virginia, the Carolinas, and Georgia. His visit to Gatewood is documented in a diary he kept during a sixty-eight-day, 1,700-mile trip through the South, where the president hoped to get acquainted with his constituents throughout the nation. He had announced his plans to visit every part of the country following his inauguration in 1789, and the Caswell County visit was his last stop in North Carolina before he crossed the line into Virginia.

The first president traveled in an ivory and gilt coach drawn by four horses, with the Washington coat of arms decorating the quarter panels. Accompanied by Governor Alexander Martin, he had visited Salem and Guilford, and it was raining when he breakfasted at the Troublesome ironworks, seventeen miles from Guilford. He suffered from rheumatism, and, because his information was incorrect, he had traveled on June 3 twelve miles further than he had intended "to one Gatewood within two miles of Dix' ferry over the Dan at least 30 miles from the Iron works." On Saturday, June 4, 1791, he breakfasted there, and, tradition says, picked a rose and stuck it in his buttonhole. That day's entry in his diary states: "Left Mr. Gatewood's about half after six o'clock--and between his house and the ferry passed the line which divides the States of No. Carolina and Virginia . . . ."

There is no marker in front of the restored house, and George Washington could not have slept at all the places he allegedly stayed. However, according to his diary, an entry written by his own hand states that he was at the Gatewood House June 3-4, 1791, and the item is included in the handwritten copy on file in the Library of Congress, Washington, D.C.

The Whit Gatewood referred to in the above article is Robert Whitfield (Whit) Gatewood (1855-1918), a great grandson of Dudley Gatewood who is believed to be the last member of the Gatewood family to own the famous house.

Here is information on the restaurant, which indicates that Hillsborough thought enough of Mr. Freeland (or his ancestors) to name a street for him:


However, the old house may now be a Mexican restaurant called Casa Ibarra. Note the following:

The phrase “George Washington slept here” is frequently heard in connection with pre-1800 houses. Those claims often prove to be false but in the case of the Gatewood House, it is a fact documented in ’s own diary. In une of 1791, while on his tour of the South, he spent the night at the farm of Whit Gatewood. At that time, however, the house was located some miles to the north near Yanceyville. Moved to Hillsborough by ames Freeland and restored in 1978, the house is now home to Casa Ibarra, a Mexican restaurant. (Photo by Bitsy McKee)

Ibarra is a Mexican chocolate and a town in Ecuador. What this chocolate house has to do with George Washington has not been determined.
_______________
Casa Ibarra
107 James J Freeland Memorial Dr, Boone Village
Hillsborough (Hillsborough)
(919) 732-3480
Dining Guide

Mexican appetizers, salads, lunch specials and combination dinners. Chicken, beef, shrimp and vegetarian dishes. Dine inside or on the patio.

You will be pleased to learn, as I am sure would President George Washington, that Casa Ibarra earned a 93.5 score when inspected by the North Carolina Health Department 31 October 2006. The Manager is George Ibarra, which may have more to do with the name of the restaurant than Mexican chocolate or towns in South America. The restaurant telephone number is (919) 732-3480. To call the office for information on the building use (919) 732-2361.
_______________

Note that the Gatewood House Restaurant and Casa Ibarra share the same address in Hillsborough: 107 James J. Freeland Memorial Drive. Was this historic building first the Gatewood House Restaurant and Tavern and then turned into Casa Ibarra. The CCHA can vouch for the fact that Casa Ibarra was indeed open for business on 3 March 2007 and provided the following telephone number to find out more on the history of the building: (919) 732-2361. From here, you are on your own. May Dudley Gatewood and George Washington rest in peace.
_______________ 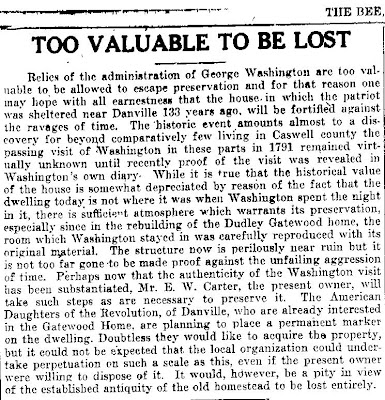