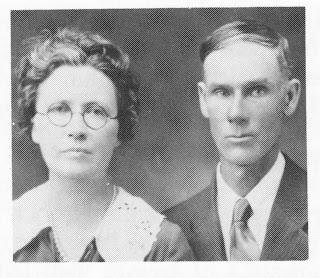 The following is from Texas County Missouri Heritage Vol, III, Texas County Missouri Genealogical and Historical Society (1992), at 230 (Article submitted by Robyn Dunn Harlan). Note that the reference to John Barbosa Frederick and wife Elizabeth has not been confirmed. This is the only publication found that claims this ancestry. Accordingly, researchers are advised to proceed with caution and not to blindly repeat what is found here.

The following history chronicles the lives of the descendants of John Barbosa Frederick and wife Elizabeth. In 1685 John and Elizabeth came to America from Alsace, France, in the ship William and Sara. They settled in Virginia. Some of the family migrated to Maryland, then to South and North Carolina. The Frederick families coming to Missouri in 1862 were natives of Person County, NC.

The records of James and Susan Frederick were recorded in their family Bible, published in 1803. Nine children were born to this union, four girls and five boys.

Abel Frederick was the fifth child born to James and Susan. Great-Great-Grandpa Abe was born Apr. 25, 1835, in Person County, NC. (These records are from the Bible of Abel and Elizabeth Frederick. The Bible is now in the possession of Mrs. Carrie [Smalley] Frederick.) Abe farmed the land near Central Baptist Church, was a member of lodge and attended church. In 1859 Abe married Elizabeth Davis, b. Mar. 6, 1840, in East Hamilton County, TN.

Abe fought for the Confederacy during the Civil War from 1861 to 1865, leaving Betty at home near Indian Creek to care for the first two of their eight children. Once during the war, Union soldiers came to the Frederick home looking for "Stedman," a friend of Abe and Betty's who was a wounded Confederate soldier. They planned to kill him. As soon as the soldiers left the Frederick home, Betty mounted a horse and rode through the woods to where "Stedman" was being hidden to warn him of impending danger. His friends were able to put him on a sled and get him to safety. At the end of the Civil War, Abe was in one of the Southern states and had to walk all the way home. He had been gone from his family over four years. Betty and Abe are buried at Central Baptist.

Homer Frederick, second son of George and Effie, b. Dec. 11, 1902, in Shannon County, MO, married Lorene Dolifka in Kansas City and owned a grocery store in Casper, WY, until his death in 1957. They had no children.

Clarence Franklin Frederick (Frank), b. Aug. 17, 1915, was a carpenter. He married Doris Berry. The had one daughter, Marlene.

Elmer and Carrie Frederick owned and operated many businesses in Texas County, including the Ben Franklin Store on Grand Ave. in Houston which is still family owned by the three grandchildren and operated by the youngest granddaughter, Melissa Dunn. Granny, who is 84, still works ten hours a day in "HER" store!

The James and Susan Frederick referred to in the foregoing article are believed to be the couple married pursuant to the following:

While the parents of James Fedrick/Frederick are not known, the parents of Susan Durdin/Durden are believed to be Jesse and Mary Durden. The above article refers to nine children of James and Susan Frederick. See: Caswell County Family Tree.