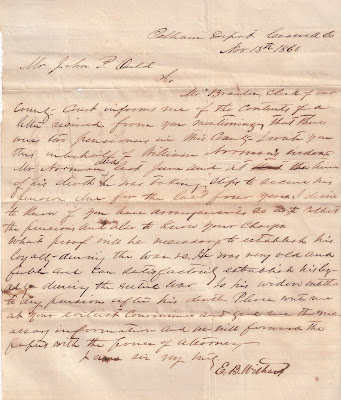 Mr Brandon, Clerk of our County Court informs me of the contents of a letter received from you mentioning that there were two pensioners in this County. I write you this in behalf of William Norman's widow. Mr. Norman died last June and at the time of his death he was taking steps to secure his pension due for the last four years. I desire to know if you have arrangements so as to collect the pension and also to know your charges.

Letter written 13 November 1866 by E. B. Withers from Pelham Depot, Caswell County, North Carolina, to Mr. John P. Auld/Ould concerning the pension of the widow of William Norman, who apparently died in 1865. With respect to what war William Norman believed he was due a pension is unclear.

The reference to two pensioners in Caswell County would seem to indicate a war before the Civil War, perhaps the War of 1812. However, the statement with respect to "his pension due for the last four years" and "proof necessary to establish loyalty during the War" are confusing. At least fourteen men with the name William Norman are known to have served in the War of 1812. Source: Ancestry.com War of 1812 Service Records.

If inquiry was being made with respect to a Civil War pension for a Confederate soldier, why was mention made of establishing loyalty during the War (presumably the Civil War)?

However, if William Norman was very old and feeble when he died June 1865, is it likely that he served in the Civil War? Moreover, one who fought in the Civil War (which in the this case presumably would have been on the Confederate side) would have difficulty establishing loyalty during the entire War. However, the general amnesty covered all Civil War participants except for certain categories.

On May 29, 1865, President Andrew Johnson provided for amnesty and the return of property to those who would take an oath of allegiance. However, former Confederate government officials, officers with the rank of colonel and above from the Confederate army or lieutenant and above from the Confederate navy, and people owning more than $20,000 worth of property had to apply for individual pardons. Though it was difficult for ex-Confederates to ask for a pardon for something they did not believe had been wrong, thousands did ask for and receive amnesty from President Johnson.

On Christmas Day 1868, Johnson granted an unconditional pardon to all Civil War participants except high-ranking military and civil officials. In May 1872 the Congressional Amnesty Act gave the right to hold office again to almost all Southern leaders who had been excluded from public office by the 14th Amendment.
_______________

The author of the letter, E. B. Withers, probably is Lieutenant Colonel Elijah Benton Withers (1836-1898), Civil War veteran and lawyer in the Yanceyville, North Carolina, law firm of Watt & Withers.

Elijah Benton Withers (1837-1898), twenty-five, also a lawyer and an 1859 graduate of the University of North Carolina, succeeded Graves as captain of the Yanceyville Grays. In 1863, Withers was promoted to major and transferred to regimental headquarters. He was succeeded as captain by Ludolphus B. Henderson, a 28-year-old former dentist.

Whether any of the following are with respect to the William Norman of this entry has not been confirmed and are placed here for research purposes only:

Permalink
Posted by RSF at 2:49 PM