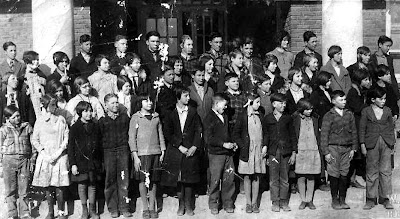 While Cobb Memorial School had a similar entrance, including white columns, the steps at Cobb were steeper and more numerous that the steps presumed to be supporting the students in the subject photograph. Also, the columns at Cobb were closer together.

In 1923 the Bartlett Yancey School was built in Yanceyville on land contributed by the family of Bartlett Yancey Jr. Initially there were eleven grades. The design was a central auditorium (with a stage) flanked by classrooms and with two classroom wings at the rear. The wood-floored auditorium doubled as a basketball court. The building was dismantled in the 1950s.
_______________

Permalink
Posted by RSF at 3:09 PM