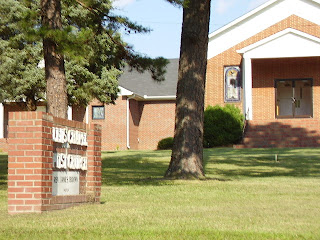 The following is from In the Beginning: The Churches of Caswell County, Jean B. Scott, Compiler (undated). Note that some of the dates are confusing, but the text shown below is verbatim. For example, if the church was organized in 1886, why was the first church building erected in 1856? And what is the significance of a "plot" in 1873?
_______________

The Allen's Chapel Missionary Baptist Church was organized in 1886. It was deeded to the Black Race and its heirs by Sam Allen and his wife, Aby, to Lewis Woods and Samuel McMullen, as trustees of the colored school of the Hightower district in Caswell County. The plot, as it was called then, was made in 1873. The church grew out of the school, which was adjoining to H. S. Thaxton land, on SR 1702 [Ridgeville Road] between Leasburg and Prospect Hill.

The first church was a log building erected in 1856. The second building was a frame building erected in 1903. A remodeling of this building was done in the early 1950s when a belfry and a steeple were added. Rev. Spencer E. Woods, then the pastor, was given the contract. A cornerstone laying was held on July, by the Allen's Masonic Order No. 676. The church was heated by wood until some time in the late 1950's when an oil furnace was installed. Kerosene lamps were the means of light until 1949, when electric lights were installed. 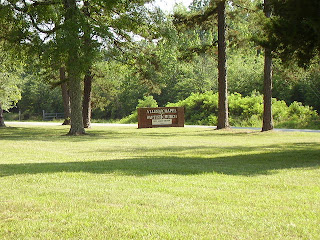 The remodelling of this building took place in 1983, with Rev. James Brown of Hillsborough as Pastor and contractor. The fellowship hall, kitchen, Pastor's study, choir room and baptizing pool are on the mainfloor with the sanctuary.

The first baptizing was done in Rudd's pond on SR 1710, then a water hole on Thaxton's farm about a mile above the church on SR 1702. From there we went to Hyco Creek on Grier's Church road; then to Houston Branch on SR 1710. A well was dug in the 1940's and the church built an outside baptizing pool in 1963.

Our senior choir was organized in 1949 under the direction of William Murphy of Sedalia, NC, growing to 40 voices with Thurlia Brandon as pianist. Then came the youth choir, organized by the pastor, Rev. George Brooks. A membership of 30 with Valerie Thompson as pianist, and Brenda Daye, Vicentia Lipscomb, and Geraldine Martin as managers and directors. The Pastor, Rev. Kenneth Lilly, organized a Gospel choir with a membership of 19 in 1974. Rev. James Brown organized the male chorus in 1982 with 19 voices.

There are a senior and junior usher board and a Pastor's Aid Society. We have Bible Training Study twice each month. Vacation Bible School is held in June of each year. Our monthly services are held each first and third Sundays, also Sunday School. Other services are scheduled on Saturday nights. Sunday afternoons and at any time during the year when an auxiliary has a need.
_______________

Permalink
Posted by RSF at 4:57 PM