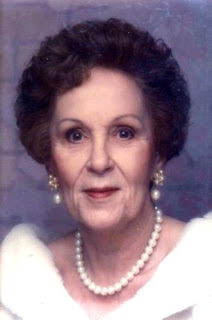 Cary, North Carolina (November 2008) - Jeanette Ziglar Wilson was born in Madison, North Carolina on 29 January 1922, a snowy day. She was a bright student, graduating from high school at age sixteen and going on to receive a professional business degree from UNC Greensboro, known then as the Womens' College. Although her first job was at her grandfather's grocery, Jeanette worked in the business office of the Washington Mill after graduation. She played on the Womens' Mill League basketball team, and at one of her ball games caught the eye of a handsome agriculture teacher from Blanch, North Carolina, her soon to be husband. Jeanette and Ed married in 1942. Jeanette was President of the Bartlett Yancey PTA, the Director of the NC 6th District United Daughters of the Confederacy, was Caswell County's Homemaker of the Year and participated in a variety of homemakers' clubs in Caswell County and in Cary, NC. In her home there existed a multitude of loving gestures; from immaculately clean surroundings to wonderfully prepared family meals that always included at least one, if not several, homemade desserts. Jeanette was Ed's partner in life. She worked alongside him at the farm in Caswell County, raised the children while he was away at war, campaigned with him when he ran for the State Legislature and served the Kirk of Kildaire Presbyterian Church with the dedication of an Elder's wife. Jeanette loved and supported her children, and adored her grandchildren and great-grandchildren. Jeanette had a great sense of humor and enjoyed celebra-tions with family and friends. She loved music and dancing even as her dementia progressed. We were all so very blessed to have known her and to have been embraced by her love until her death on November 25, 2008.

The family is grateful for the loving care provided to Jeanette by her extended family at Brighton Gardens of Raleigh, Dr. Janet Dear, and Hospice of Wake County. The family will receive friends at Brown-Wynne Funeral Home in Cary on Saturday, November 29, 2008 from 7-9 p.m. A graveside service will be held at Highland Burial Park in Danville, VA at 11 a.m. on Sunday, November 30, 2008. A memorial service will be held 3 p.m. on Sunday, November 30, 2008 at the Kirk of Kildaire Presbyterian Church in Cary. In lieu of flowers, the family would appreciate contributions in Jeanette's memory to the building fund of Kirk of Kil-daire Presbyterian Church, 200 High Meadow Drive, Cary, NC 27511, or to Hospice of Wake County, 1300 St. Mary's Street, Fourth Floor, Raleigh, NC 27605.
_______________

Permalink
Posted by RSF at 6:37 PM