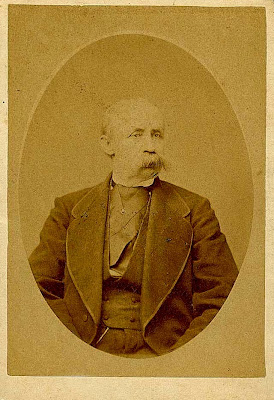 The following is from a Glenn family descendant:

I have a photo of my great great grandfather, John Wilson Glenn II. He and his father were named for John Wilson, patriarch of the Wilson family that included Mary Lumpkin Glenn who married Bedford Brown of Caswell County. JWG II was born in Milton in 1819 and was Mary Lumpkin Glenn's nephew. I believe, but don't know for sure, that his father (Mary's brother), JWG, had a store in Milton. His wife was Sarah Erwin, of the Morganton Erwin family. His personal affiliations are not quite as prestigious as Mary's, but he was a Surgeon in Charge in the Civil War (Dalton, GA), and served under Jefferson Davis in the Mexican War. The family at one time had a letter from Jeferson Davis to JWG II's son, but sadly my grandmother sold it. The Museum of the Confederacy has two letters from JWG II's son to Jefferson Davis in their collection.

Somewhere in all of this is an intriguing story about why these Glenns left North Carolina for Mississippi and Louisiana. As far as I can tell, they are the only ones who did.

Permalink
Posted by RSF at 2:04 PM