That Katharine Yancey Malloy married into old money is a vast understatement. Below is a short biography of the founder of the Pritchett fortune and grandfather of Ira Pritchett III (also his namesake). The biography was published in 1915 in the Encyclopedia of Virginia Biography. Click on the pages for a larger image. 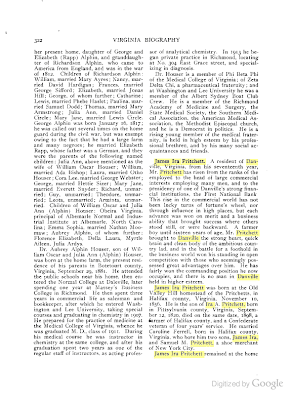 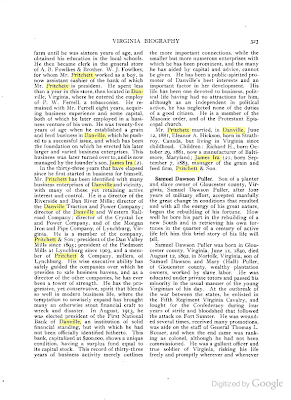 Katharine Yancey Malloy is buried beside her parents in the First Baptist Church of Yanceyville cemetery: 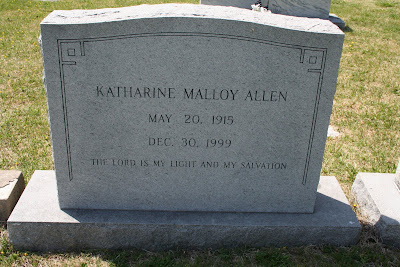 She apparently was married at one time to a person with the surname Allen. Who this person was is unknown. There is no other Allen buried in the First Baptist Church of Yanceyville cemetery. Moreover, Katharine Malloy Allen died in Pima County, Arizona. Is her Allen husband buried there? Why was Katharine Malloy Allen returned to Yanceyville, North Carolina, for burial. What happened to her first marriage to James Ira Pritchett III? Did he die? Were they divorced? Where is he buried?
_______________

Allen, Katharine Yancey Malloy Pritchett, was born May 20, 1915 in Yanceyville, NC. Died December 30, 1999 in Tucson, AZ. She was the daughter of Dr. Stephen Arnold Malloy and Nannie Kerr Malloy. She was a graduate of Meredith College, Raleigh, NC. She was first married to James Ira Pritchett III who passed away December 29, 1950. She later married Woodson Hargis Allen of Black Arrow Lodge, Cortaro, AZ. Mrs. Allen was a member of the First Baptist Church of Yanceyville, NC, The Daughters of the American Revolution, Daughters of America Colonists, North Carolina Society of 1812, North Carolina Society, Colonial Dames XVII Century, a charter member of the John R. Baylor Tucson Chapter, United Daughters of The Confederacy. Mrs. Allen was a direct descendent from which the town of Yanceyville, NC is named. She is survived by her husband, Woodson Hargis Allen and cousins. Funeral Service will be held 1:30 p.m., Tuesday, January 4, 2000 at Adair Funeral Home, Avalon Chapel, 8090 N. Northern Ave at Magee.