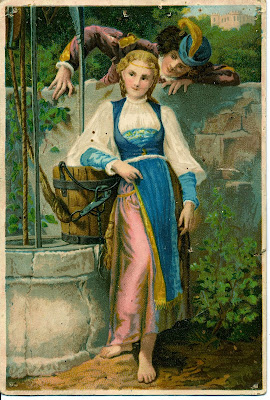 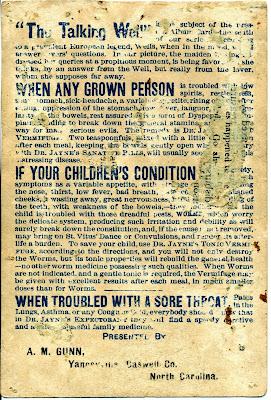 (click advertisement for larger image)
This item possibly dates from the late 1800's. While the A. M. Gunn most likely is Dr. Allen M. Gunn, M. D. (1807-1884), that has not been confirmed. Note the holes in the corners, which may indicated that it had been pinned up for display.

For more on Dr. Allen M. Gunn, M. D., visit the Caswell County Family Tree and use the search feature. To see photographs of the house in which Dr. Gunn lived in Yanceyville (and from which he may have run his medical practice), go to Dr. Allen Gunn House.

Founder Dr. David Jayne began as a country doctor in NJ, but moved to in 1837 where he set up a practice. By April 1837 he moved to No 32 South Third Street. He started buying and selling medicines to patients, but then expanded to making his concoctions available to the general public. In 1845, Dr. Jayne moved to a larger establishment at No 8 South Third Street. In 1850 he moved to the famous address embossed on many of his medicines: No 84 and 86 Chestnut Street. He later died in 1866. His medicine business was a major success. He is credited with being the first to publish almanacs for advertising business. Above info taken from info provided by descendant John Jayne, Email: jrj@sonic.net

The Dr Jayne's cards are one of the most beautiful series of Victorian trade cards (#5 is the first, #22 is the last, and some are unnumbered). They were put out one a year for 22 years. See Winter 1997 issue of Trade Card Quarterly for article on Dr Jayne's Family Medicines by Neil Nichols. The “Talking Well” card was # 10 in the series, but the date is unknown.

For much more go to Dr. Janye Family Medicines.
Permalink
Posted by RSF at 9:34 PM