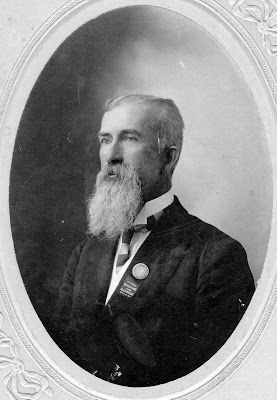 Believed to be Dr. Gunn, but which Dr. Gunn is not known.

This photograph earlier incorrectly was identified as an image of Dr. Allen M. Gunn, M. D. (1807-1884) of Yanceyville, North Carolina. However, the badge being worn in the above photograph shows the following:

Medical Society of the State of North Carolina
51st Annual Meeting
Raleigh
May 24-26, 1904

When this photograph was taken (presumably at the Raleigh meeting in 1904) Caswell County had three medical doctors with the Gunn surname: Dr. George Washington Gunn, M.D.; Dr. James Lynwood Gunn, M.D.; and Dr. Adolphus Gunn, M. D. of the Purley community.
No record has been found establishing a death date for Dr. George Washington Gunn, who was alive at the time of the 1900 US Federal Census, but apparently died before the 1910 census was taken. He had a substantial practice and may have served as Caswell County Coroner in the 1890s. Born in 1832, he would have been 72 years old in 1904. The purportedly adopted son of Dr. Allen M. Gunn, M. D., Dr. George Washington Lafayette Gunn, M. D. (1832 - After 1900), married Virginia Hennie Burton in 1860. They had at least four children, and apparently lived in Dan River Township, Caswell County, North Carolina. For more on this family visit the Caswell County Family Tree and use the search box.

Little has been found on Dr. Adolphus Gunn, M. D. of Purley.

The record with respect to Dr. James Lynwood Gunn is a bit more complete. He was born in 1857, thus being around 47 in 1904. His death is reported by some as 1905. However, the following newspaper article gives a death date of 22 February 1906.

Reidsville, NC - (Reidsville Dispatch, February 23, 1906) - Dr. James L. Gunn a well know citizen of Caswell County, NC was found on the roadside yesterday morning. Investigations revealed he had died of a broken neck, presumably from a fall from his buggy. Dr. Gunn has been a periodical drinker for a number of years and while no one has been found who knows the exact cause of death it is supposed that while intoxicated he was thrown from his buggy and a fracture of the neck resulted. The remains will be interred at Camp Springs today, the authorities deemed an inquest unnecessary. Reprinted in The Charlotte Observer (24 February 1906).

North Carolina had many skilled and progressive physicians in the late 18th and early 19th centuries; it also had many untrained and unscrupulous practitioners who claimed the title of “doctor.” The lay public often couldn’t distinguish one group from the other. Even the physicians who had bona fide medical training recognized a need to improve medical education and promote a scientific approach to healing. It became obvious that all would benefit if physicians found a rallying point.

Attempts to organize the medical profession were made as early as 1790. In 1799, the state legislature approved a special act creating a corporation with the title: The North Carolina Medical Society.

Unfortunately, the original Medical Society languished and disappeared in the early 1800s. But the idea was too valuable to die. The present Society was organized in 1849, and it has held annual scientific sessions each year since then, except for five years of the Civil War and one year during World War II. Twenty-five physicians attended the organizational session in 1849. Today, the Society has more than 12,000 members.