Maud Florance Gatewood (1934-2004) grew up in Yanceyville, North Carolina. Like many children of the town, she considered the Caswell County Courthouse her personal playground. She probably knew its ins and outs, secret doors, and special hiding places as well as any Yanceyville child. Her family home was just across the Square, and her father John Yancey Gatewood (1883-1954) was Caswell County Sheriff on three occasions. His office was in the Courthouse. Eventually, Maud Florance Gatewood left Yanceyville to pursue her art career.

Later in her life, Maud Gatewood returned to Yanceyville and became a member of the Caswell County Board of Commissioners. And, given her knowledge of the old Courthouse, it is not surprising that she would again nose around in the non-public areas.

Below is a photograph kindly provided by a Yanceyville photographer that shows what Maud Gatewood found on one of her excursions. These photographs were taken in July 1976. 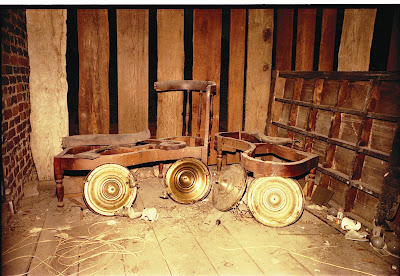 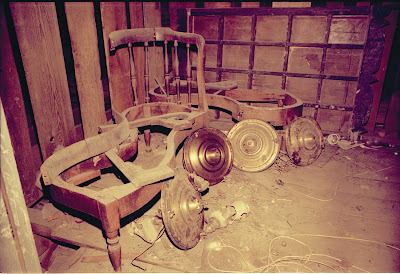 This is in the Courthouse attic area above porch. It is accessed by the stairwell to the left of the main entrance. Note amongst the "rubbish" are what appear to be two pieces of furniture.

Maud Gatewood rescued this "discarded" furniture, had it restored, and eventually bequeathed it to the Caswell County Historical Association ("CCHA"). Today, the two seats are in the Richmond-Miles History Museum's main entryway. The CCHA owns and operates the Museum. 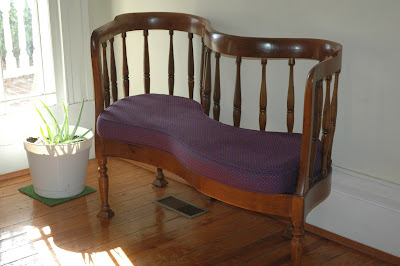 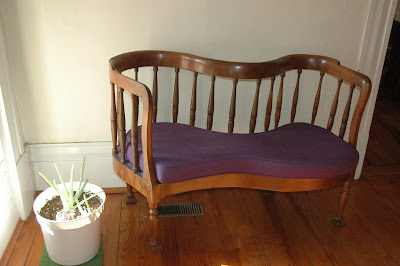 Some speculate that the seats were used by lawyers to confer with clients. Whatever the use or purpose, they are beautiful. We have Maud Florance Gatewood to thank for saving and restoring the seats and our Yanceyville photographer friend to thank for capturing the before and after images.

Note: Remaining unidentified is the pigeon-holey structure to the right and in the background of the attic photographs. Also note that not enough components appear in the Courthouse attic photographs from which to assemble two chairs. And, what are the curved (scroll-like) pieces seen across the seating area of the disassembled seats? Those items did not end up in the restored product.

Permalink
Posted by RSF at 9:32 AM