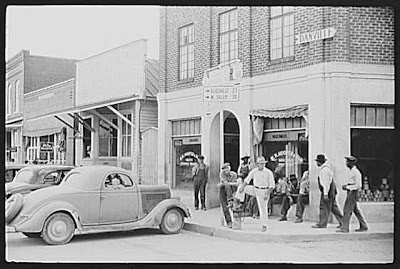 Apparently on the corner of what then would have been Main Street and Greensboro Street, facing the Square in Yanceyville, North Carolina, once stood the Star Saloon. That structure was replaced by Henry Writch Hooper when he constructed on the spot a general store. This is W. H. Hooper & Son, which is seen in the photograph above.

Note the following from Wheel Tracks (Rotary Club of Yanceyville), which was written by Tom Henderson in 1942:

In planning his new store building, to take the place of the old "Star Saloon" location, lately occuppied by The Caswell Messenger, (which building alone of all others on the public square, excepting the courthouse, has survived the ravages of fire and decay in my lifetime), he [Henry Writch Hooper] provided a Masonic Hall, which is also used by the Junior Order United American Mechanics. . . .