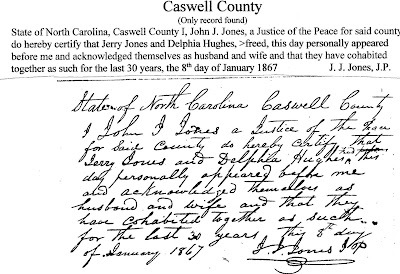 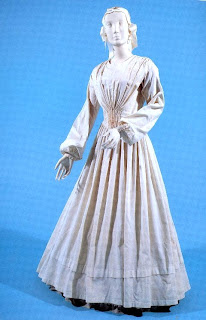 Although there was no legal recognition of their unions and, in some cases, laws strictly forbade it, slaves married. Like the whites who lived about them, they chose their partners from among their fellow workers on their own plantation or from a local farm. On rare occasions, owners would choose the partners for their slaves. It has been estimated that one out of ten slave marriages were arranged in this fashion. And, in an even more rare-- although not unheard of--situation, some masters actually treated their slaves like breeding stock.

Those Slaves who were allowed their own choice in the matter usually chose a husband or wife when they were in their mid to late teens. The owners, as well as the parents, had to approve of the choice. Even though owners frowned upon their slaves taking a partner from a nearby farm, the practice was fairly common. Male slaves had "'broad" wives. That is, they had wives who lived "abroad," or on another plantation. The men would work and live on their owner's farm but would visit their wives once or twice a week, usually Wednesdays and Saturdays after work. During these visits, the husband might bring a gift to his wife and family: a few extra vegetables, a possum, or a mess of fish, and the wife would fix a large meal, mend her husband's clothing, and generally make a fuss over him. In some cases, owners were known to purchase a slave so that families such as these might live together. After all, slaves who stayed on the place and who were not slipping off to attend to family business on a nearby farm were,

The marriage ceremonies for most slaves involved a simple exchange of vows at a prayer meeting followed by the couple jumping over a broom. Some slaves located on larger plantations (usually the house servants) could expect a bit more. There were owners who would dress up the bride and groom, throw a feast, and invite the neighbors white and black. Often these "special" slave marriages would occur at Christmas when the work had been stopped and the master's extended family would be visiting. But very few slaves could expect such treatment.

Most slave wedding ceremonies were performed by the master or by one of the slaves who served as the preacher in the slave quarters. Only rarely did a white minister marry slaves, although this seems to have been more common in North Carolina than in other slave states. Most owners were, perhaps, uneasy at the prospect of having one of their own ministers create a bond that economics might force them to break. The great sticking point for slave marriages were found in the vows, themselves. A Christian ceremony that had no status in law and that created a bond that could easily be broken by a third party could not contain the words "till death do you part." They were absent in a slave marriage ceremony or were replaced by phrases such as "till death or distance do you part."

Whether they had jumped over a broom in the quarters or had taken vows in a suit and dress on the verandah of the big house, following the Civil War many of the newly freed men and women wished to have their unions recognized by the state. In 1866, the General Assembly passed "An Act Concerning Negroes and Persons of Color Or of Mixed Blood." This act called for blacks and those with mixed blood who had been living as husband and wife to appear before the Clerk of the County Court or a Justice of the Peace to have this fact recorded. They were expected to have their cohabitation registered before September 1, 1866, if they were to be recognized as married.

In a great many cases, cohabitation bonds are the only extant record that reveal the husband or wife of a slave or, for that matter, the owner of a particular slave. For these reasons, they are extremely valuable to genealogists interested in African American families. And for those of us who sometimes need reassurance about the resilience of a human heart in a hostile world, they are equally important.

The History Room holds an index to all cohabitation bonds for the state of North Carolina. For more information about slave marriage customs, please consult: Eugene D. Genovese. Roll, Jordan Roll: The World the Slaves Made (New York: Pantheon Books, 1974).

Here is an example of such a slave cohabitation record from Person County, North Carolina: 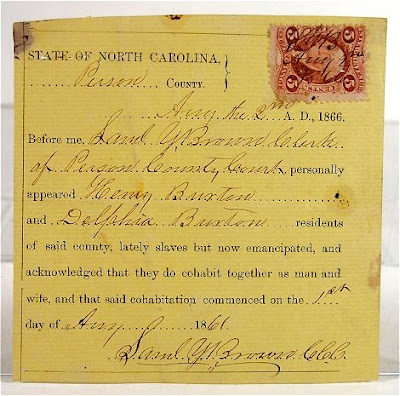 While the above slave wedding dress did not originate in North Carolina, it is indicative of the importance placed on the relationship. Here is background information on this image:

This hand-sewn, white, plain-woven cotton homespun wedding dress was made for slave Sarah Tate around 1845 by her young mistress. It is touching evidence of the rapport that existed between some mistresses and their slaves. Sarah treasured the dress until the day she died at nearly one hundred years of age. Sarah had been brought to Texas with her daughter by the Edgar family of Concrete, DeWitt County. (San Antonio Museum Association, San Antonio, Texas)

The University of North Carolina Press