WHEN THE GIRL SCOUTS
MET IN AN OLD
ORANGE SCHOOL BUS
AND HELD PICNICS ON THE COURTHOUSE ROOF
The bus was on old one, derelict from the School Bus Garage across the back yard from the Courthouse, no good because it had no engine. But all the windows were there, and it made a place we could store our things and meet, even if it was raining (but not in cold weather--with no engine, no heat). Of course we hadn't always met in a bus. Before we got the bus, we met in the basement of the Agriculture Building (the “Ag” building) but that wasn't really OURS. Not like the bus. We had to share the “Ag” with Tuesday night Rotary Club meetings, canning workshops, and community suppers of all kinds (that was about the only place in town to meet, except for some church basements).

One side of the basement was the local library, a place where I spent a lot of time. I always liked the shaded brick steps that came down from the front lawn on the library side of the building. Sitting there on a hot summer day with a book just-gotten from the library was bliss. It was cool and always slightly damp, there between the brick of the building and the stone wall penning in the courthouse lawn, and nobody could see you, unless someone else came to the library which didn't happen too often. Even on the hottest day that stone wall was cool, and the moss was always green and soft, and there was enough moisture for other things to grow, sometimes strange wild flowers, sometimes just dandelions.

At times when we had Girl Scouts, we would play there, or just sit on the steps, especially when it was real hot, waiting for our leader, Miss Patty, to come across the square from the Ford place where she worked. Eventually, when we got the bus to meet in, it was parked just behind the Ag building, so we still had the steps and the courthouse wall, and the courthouse itself towering above us. Its a good thing, too, because the bus was mostly in the sun, and those windows wouldn't all open so it got hot--hot and dry and dusty so you couldn't stand it, and we would go hold our meeting on those cool steps.

The courthouse was always a sort of challenge, a place you were afraid of but curious about, all at the same time. Sometimes we would go exploring, when we could. The first floor wasn't much, just offices, down a long dim hall with big heavy doors at either end, but it smelled old; the smell of old paper and old furniture and the old ink that you had to dip your pen into. But I liked Mr. Blaylock's office, with all the BIG old books, but then I liked books anyway.

The basement was really spooky. It was dim, and the ceiling was low. The stone walls had rounded openings from one room to the next, some of them boarded up, with doors in the board walls. You could imagine anything being there--things left from years and years ago, especially ghosts. It looked like a place where Poe stories really happened. They really did have almost everything there (maybe the ghosts, too), from stacks of schoolbooks, to the moonshine still waiting for court upstairs.

The courtroom was upstairs. You went up twisty stairs on either side of the front porch (even the porch had an upstairs!) or up a long straight steps down at the back end of the hall. But mostly you couldn't use the back steps because it came out in the judge's room, and the door at the bottom was kept locked. That was the stairway Chicken Stephens came down to get murdered. At least that's what they said.

You could go up the front steps though, so sometimes we would go up when there wasn't any court (I went when there was court, too, but not with the Girl Scouts) and we could go in and walk around the big courtroom. There wasn’t much of anything there, just the benches and some tables in front with a fancy railing around them, and the place up in front where the judge sat. When we felt daring, we would go up and sit in his chair, but you always felt someone was going to come and tell you not to. And sometimes the judge's door would be left unlocked, and we could look in there. There wasn't much there, but you could see where the steps when down, and think about Chicken Stephens, and get prickles down your back.

When we were REALLY daring, and could talk Miss Patty into it, we would go right on up the stairs past the courtroom level and into the attic. There was a door at the top of the steps, not a regular door, short, and made out of boards with cross pieces inside. Inside, in the part of the attic over the stairways and the porch, it was dark so you had to wait till your eyes got used to it to be able to see at all. After a while, you could see an opening in a wall, and once you got to it you could see pretty good because you were in the big attic over the whole rest of the building, and there was light coming in from the tower up in the middle. There was a walkway through the rafters from that doorway up to the middle, with railings on either side. Everybody who went up there must have had to hold on to the railings because they were polished smooth from wear. We had to hold on because Miss Patty made us, and besides, we probably would have anyway, because we were way up above even the ceiling of the courtroom, and you could look down through the openings in the middle and see all the way down to the benches. But you had to be careful about looking down, because if you didn't look up, you could run into some of the rafters that were all over the place. There was always someone who was afraid to walk out on that walkway (it was almost like a bridge), but when everyone else went, they would be just as afraid to stay by themselves in the dark room, so they would finally decide to come on with the rest of us.

Out in the middle, at the end of the walk, was the place at the bottom of the tower, and the weight from the clock, going back and forth. That was a big box-shaped thing on the end of a long iron rod, and you had to dodge it as you went by. Then you went up a short, steep set of steps to a landing that was level with the roof. You could either go out a little door at the top of the steps, on the back of the tower, or you could go on up even steeper steps to where the clock was. You could see all the works from the clock, all sorts of gears and things, in the middle of the tower, with rods going out the the clock faces on the sides of the tower, and up above that the bell that rang the hours and you could hear all over town. You didn't want to be in there when it rang.

The best fun was to go out the little door onto the roof. I think Miss Patty must have been very brave to let us go out there. She even when out with us. It was like Yanceyville was a whole different place when you saw it from up there. Everything looked different when you could look down on its roof, and you could see how all the roads went and where things were, things you couldn't see from the ground. If you went up to the edge of the roof it made you feel like jelly inside and you would get prickles in your legs so you would back off and go and sit down close to the tower. But after a while it would wear off, and you could walk around without it bothering you. Sometimes we would even take picnic lunches up there, just sandwiches I guess, or maybe leftover Girl Scout Cookies, and something to drink.

That was fun, to be way up above everyone else, eating and drinking on the roof, and watching what went on down below. You could watch everybody walking around the square, and they wouldn’t even know you were up there watching, but sometimes someone would look up and see you, and wave. And if you did get brave, you could go to the edge, and look down and see the orange bus. 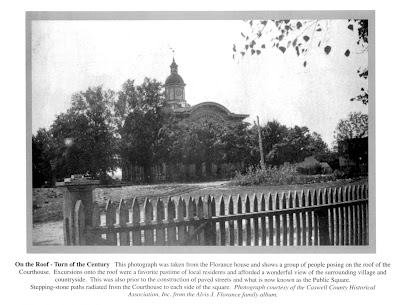 (click on photograph for larger image)
While this photograph was taken almost a half a century before Ann Gunn Everitt wrote her memory, it does show the popularity of excursions on the courthouse roof.