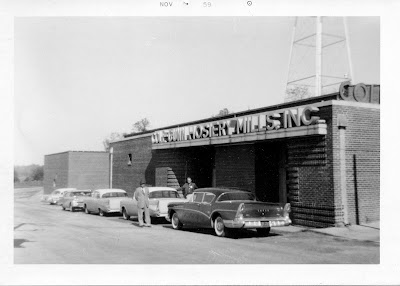 (click on photograph for larger image)
While the men in the photograph have not been identified, the 1957 Buick was owned by Roy Vincent Atwater. The man closer to the building may be Owen Paschall or William Bennett (Bill) Atwater. The man to the left (in the street) could be Thomas Edward (T. E.) Steed, who was a shareholder in the hosiery mill. 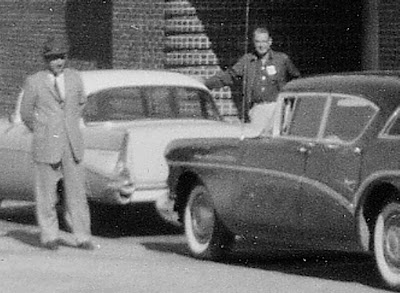 (click on photograph for larger image)
Cole Chevrolet is just across the street (to the left in this image).

The Cole-Gunn Hosiery Mill apparently was established in 1957 (Yanceyville, North Carolina) and within a year was employing twenty people in three shifts a day. It produced 1,200 dozen children's anklets each week. In 1959 it completed an addition to its building for the installation of fifty new seamless hosiery machines. While not clear, it may have changed its name to the Caswell Seamless Hosiery Mill. At some point the Royal Hosiery Mill occupied the same building as had housed the Cole-Gunn Hosiery Mill and the Caswell Seamless Hosiery Mill. In 1968, Royal began an expansion program to double both its manufacturing space and number of employees. Royal produced special hosiery for a Siler City firm that sold directly to Sears and Roebuck. After about seven years Royal closed because the style in hosiery changed to "pantyhose," which it was not equipped to produce. 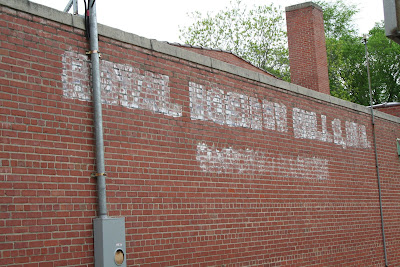 "Royal Hosiery Mill" can barely be seen in this recent photograph of the building that began life as the Cole-Gunn Hosiery Mill. The building is being converted to a municipal training center:

Permalink
Posted by RSF at 2:02 PM