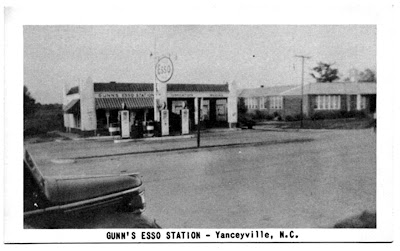 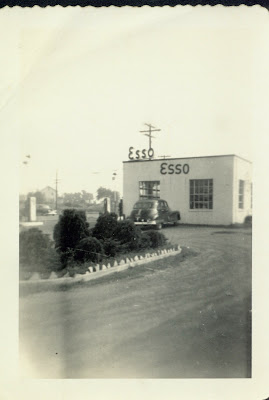 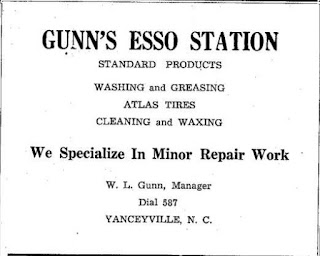 This Esso Service Station on South Main Street in Yanceyville, North Carolina, was built and owned by William Laroy Gunn (1910-1984). He sold the business to Robert Pleasant, who eventually sold it to Samuel Wilson Shaw (1925-1980). Note the Bartlett Yancey Elementary School in the background of the first photograph.

Many young boys spent time "hanging around" the Esso Station (under various owners). There was a preferred seat on the soft drink box, usually reserved for the older boys of the neighborhood. Gasoline was around thirty cents a gallon and the strongest drink available was a Coca-Cola.

To see more on the Shaw and Bowes family go to the Caswell County Family Tree.

For photographs of these families go to the Caswell County Photograph Collection.

Yanceyville - William Laroy Gunn, 73, died Friday at Duke Medical Center, Durham. Funeral will be 2 p.m. Sunday at Yanceyville United Methodist Church, where he was a member. Masonic graveside rites will be in the church cemetery. He was a retired superintendent of Yanceyville Water Works, a member and past master of Caswell Masonic Brotherhood Lodge 11 and a member and a past president of Yanceyville Rotary Club and a member of Paul Harris Award. Surviving are wife, Mrs. Elizabeth Foster Gunn; son, William Gunn of Danville, Va.; daughter, Mrs. Nancy Bush of Phoenix, Ariz.; brother, Henry Gunn of Yanceyville; five grandchildren. Memorials may be made to the church building fund. The family will be at the home. Hooper Funeral Home is in charge of arrangements. Greensboro News & Record, Greensboro, NC Sat. 1-28-1984.