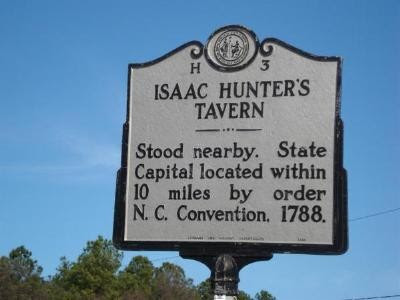 Most have heard the story of Isaacc Hunter's Tavern. It was the scene of horse races and frequented by political figures in the late 1700's.

John Rainey's wife Elizabeth Hunter Rainey of Caswell County was the daughter of an Isaac Hunter and she had a brother named Isaac Hunter. How can we determine which Isaac Hunter became so popular that the City of Raleigh was laid off near his tavern, in the forest, with nothing close by, to become the capital city of North Carolina?

Elizabeth's father, Isaac Hunter, apparently had twelve children and left a will in Chowan County, North Carolina, which named his children. And, any one of the sons could have named a son Isaac.

See, however, An Archaeolgical Evolution.

The city of Raleigh was laid out in 1792, following a resolution by the 1788 North Carolina General Assembly that an "unalterable seat of government" should be established within ten miles of Isaac Hunter's tavern. The founders were able to find a site belonging to a Mr. Lane just four miles from the tavern in Wake County.

Isaac Hunter's Tavern was apparently popular with the legislators of the time. No city or town existed on the site before it was chosen to house the capital. Raleigh is one of the few cities in the United States planned and built specifically to serve as a state capital.

The following is from the Raleigh City Guide:

Raleigh, the capital of North Carolina and the seat of Wake County, actually began as a tiny crossroads hamlet named Bloomsbury. A planter named Joel Lane purchased several thousand acres in the area during the late 1760s, and constructed his home there. As a major land owner, Lane was naturally drawn into politics and soon found himself a part of the North Carolina General Assembly. And so, when the legislature decided in 1792 that the new state capital should be established within 10 miles of Isaac Hunter's tavern (a popular drinking spot), Lane was only too happy to sell them a thousand-acre plot in the recently formed Wake County. Named for Sir Walter Raleigh, the new capital was modeled after Philadelphia, the nation's capital at the time, and was financed by selling off lots for residences.

The question of a new capital had troubled North Carolina politics since 1777. Unable to decide the matter, the legislature referred it to the state's Ratifying Convention of 1788, which rejected the United States Constitution. On 2 Aug. 1788 the convention voted to fix the seat of government within ten miles of Isaac Hunter's tavern in Wake County near the falls of the Neuse, but to let the legislature determine the exact spot within that radius. In 1792 land was purchased and the city of Raleigh was laid out in Wake County; by the end of 1794 a small brick statehouse was erected there (N.C. STATE REC., 22:26--29, 33; LEFLER AND NEWSOME, 243--45).

A JOINT RESOLUTION HONORING THE MEMBERS OF THE 1792 GENERAL ASSEMBLY, THE NINE CAPITAL COMMISSIONERS, AND ISAAC HUNTER ON THE 200TH ANNIVERSARY OF THE FOUNDING OF THE CITY OF RALEIGH AS THE CAPITAL OF NORTH CAROLINA.

Whereas, between 1777 and 1790, members of the General Assembly introduced without success several bills to establish a permanent seat of government; and

Whereas, the Constitutional Convention of 1788 addressed this issue and adopted an ordinance providing that the location of the capital be established within 10 miles of the Isaac Hunter Plantation in Wake County; and

Whereas, on January 5, 1792, the General Assembly ratified the action of the Constitutional Convention and permanently established the seat of government for the State of North Carolina in Wake County; and

Whereas, a legislative commission, consisting of eight members representing the eight judicial districts of the State and one at-large member, was assigned to select a site in Wake County for a State capital, survey and lay off a town, sell lots to prospective citizens, and determine a particular site for a State house; and

Whereas, on March 20, 1792, five of the nine commissioners met at Isaac Hunter's Tavern in Wake County to begin their task; and

Whereas, the commission viewed several sites and, on April 2, 1792, purchased 1,000 acres of the Joel Lane Plantation and later completed its mission; and

Whereas, the General Assembly ratified the actions of the commission and named the city Raleigh on December 31, 1792; and

Whereas, 1992 will mark the 200th anniversary of the founding of the City of Raleigh as the capital of North Carolina; and

Whereas, a planning committee has been actively preparing a year-long celebration to mark the significance of this historic occasion;

Now, therefore, be it resolved by the Senate, the House of Representatives concurring:

Section 1. The General Assembly honors the memory of the members of the 1792 General Assembly, the nine Capital Commissioners, and Isaac Hunter on the 200th anniversary of the founding of the City of Raleigh as the capital of North Carolina.

Sec. 2. The General Assembly encourages the citizens of this State to participate in all of the activities planned for this historic occasion.

Sec. 3. This resolution is effective upon ratification.

In the General Assembly read three times and ratified this the 15th day of July, 1991.

President of the Senate

Speaker of the House of Representatives