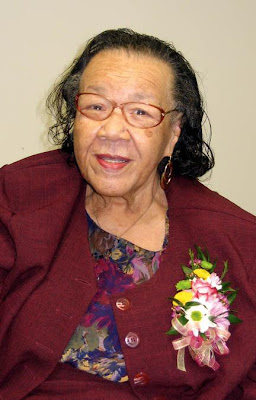 The Caswell County Senior Center was filled to capacity Thursday with well-wishers and admirers as Ms. Inez Blackwell was chauffeured to the center's front door in a shiny, white limousine. Locally, March 15 has been dubbed "Inez Blackwell Day" in honor of the Caswell County woman who has given of herself in so many ways to so many people over the course of her life. Mementos quickly began to pile up on the table where Ms. Inez' family sat at the senior center. Spoken accolades filled up the room and spilled out through the door opened to let in the fresh air and sunshine.

Ms. Inez' granddaughter, Michael Vivienne Pemberton, read a poem she had written for her grandmother:

"You are being honored by your family, friends and community," Michael read aloud. "You are the best and we all love thee. This is our way, We hope and pray, To honor and cherish you on 'Inez Blackwell Day.'"

Granddaughter Cheryl Allen sang a song she had written for Blackwell. Charlie Blackwell Sr., her husband, and five of her six surviving children sat close to Ms. Inez, who beamed from her wheelchair, wearing a fresh corsage and a peaceful smile. Two memorial candles were lit for children Vivian and Michael, who have passed away.

Caswell County Commissioner Jeremiah Jefferies was one of the first to speak and offered Ms. Inez a plaque commemorating her service to the community. "You've been like a mama," he said affectionately, as he gave her a hug. Yanceyville Mayor Dan Printz read a proclamation honoring Blackwell, saying she'd earned the town's respect through her wisdom and community spirit. Sabrina Lea of the Piedmont Triad Council Area Agency on Aging also offered up praise. We've decided that you are a phenomenal woman," Lea said, as she commented on Blackwell's "capacity to care for this wonderful and beautiful" family and her "diligence in caring for the community." "You set an example for folks of what it's like to be a woman, a mom, a sister and an advocate for us all," Lea concluded.

Blackwell also received a plaque from her Yanceyville Missionary Baptist Church, where she has served over the years as a deaconess, choir secretary, Mother of the Church, pastor's aide and missionaries and program committee member. Edith Gentry read two congratulatory letters sent to Blackwell. The first was from Gov. Mike Easley, who wrote, "This is a momentous occasion that deserves much celebration.... I thank you for a job well done." Next was a letter from Sen. Richard Burr, "Enjoy the special attention and best wishes for many more years," Burr's letter read in part.

Senior Center Director Donna Pointer, who moderated Thursday's program, recalled many happy times seniors there had spent with Ms. Inez, including the time she danced the hula at the senior games. Pointer showed Blackwell a copy of "Dead-End Road," Deborah Brown's book about her family's struggle to get the family a quality education, which will be donated to Gunn Memorial Library in her name. Pointer also gave Ms. Inez two ceramic angels.

Others added in their two cents as well. Said Paul Robinson, "That lady sitting there is a unique person - a person sent by God. You know they say, 'It takes a village.' She was part of that village." Jean Vernon said, "Now that you are retired, get to work on that book!" And Virginia Totten: "She is a woman of her word. If she says she is going to do something, you'd better believe it's going to get done."

Inez Blackwell thanked all those who attended the party in honor, adding she appreciated the bouquet of flowers presented to her by The Caswell Messenger. "I have had my flowers while I live," she said with a quiet smile.

Ms. Inez has shared her love and wisdom with the community through her weekly column in The Caswell Messenger for more than 30 years.

Inez Elizabeth Graves was born and raised in Caswell County, the daughter of William and Carrie Graves. She attended the Caswell County Training School in Yanceyville. She received a two-year degree in Early Childhood Education from Alamance Community College. She married Charlie Blackwell Sr. in 1952 and the couple raised eight children: Betsy, Charlie, Jr., Vickie, Carol, Derek, Bobby, Vivian and Michael. Over the years, Ms. Inez has served as president of four PTSA organizations. Gov. Jim Hunt presented her with a certificate for her work with Community Watch and she has received awards for her volunteer work with the Boy Scouts and the Senior Center Golden Friends. She received the Governor's Award for Outstanding Volunteer Service in 2003.

Ms. Inez counts cooking as one of her favorite hobbies. Her favorite hymns are "Amazing Grace" and "May the Work I Have Done." 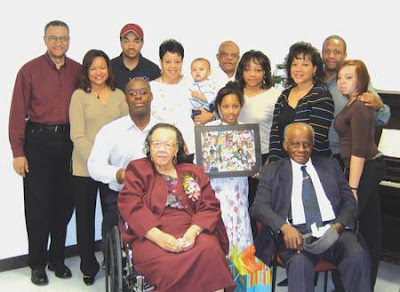 Source: The Caswell Messenger (which retains all rights)
Posted by RSF at 10:20 PM