From 1897-1909 Kitchin served in the U. S. House of Representatives. This may explain why Kitchin's signing the articles of incorporation was notarized January 10, 1905, in the District of Columbia. It may have been mailed to him for signature while he was serving in the U.S. Congress.

4. These materials may have been in the possession of Alice Charette because she is Alice Jacqueline Jones Charette (1925-2017), a granddaughter of Franklin Beauregard Jones (1860-1931) who may be the F. B. Jones listed as one of the incorporators and stockholders. Note: Alice Jacqueline Jones Charette is a maternal first cousin of Emily Jean Bradsher Scott and Martha Ann Bradsher Spencer.

5. A copy of the Bank of Caswell Articles of Incorporation was filed with the County Clerk in Caswell County, North Carolina. The R. L. Mitchelle whose signature is found on the document most likely os Robert Lee Mitchelle (1866-1935), who served as Caswell County Clerk of Court 1902-1922.

"During the busy Yanceyville years, Mr. Mitchell held many positions of honor and trust in addition to his duties as Clerk. In World War I he served as chairman of the registration committee, as County food administrator, and as chairman of the Liberty Loan Committee. As treasurer of the Red Cross, the Y.M.C.A., Jewish Relief and Armenian and Syrian Relief, Mr. Mitchell still found time to head the promotion for the Caswell County Agricultural Fair. Mr. Mitchell was president of the Bank of Yanceyville and responsible for training Mr. Sam M. Bason, his successor. He also bought the Yanceyville drug store and kept it open for the use of the doctors until Pharmacist T. J. Ham took over. He and his wife and family were greatly missed when they moved to Danville."

This was the only Caswell County bank reported in the 1905 Bank Report, which is a good indication that it was the only bank in the county. The Bank of Caswell, Milton, was in business from February 8, 1905, until November 28, 1914, when the bank ceased operation.

Local legend in Milton has it that one Daniel Hines, son of Bank of Caswell Cashier Edward Hines, absconded with the bank's funds around 1815 and departed Milton, presumably moving quickly. If correct, this certainly explains the bank's closing its doors.

The closing of the Bank of Caswell ended Milton's banking business, which had lasted, with some interruptions, for almost one-hundred years. No record has been found of a bank in Milton after November 28, 1814.

Note that the Bank of Caswell apparently was the third bank to occupy the "Milton State Bank" building. A 1908 map created to assist insurance companies assess risk identifies this building as the "Bank of Caswell."  This building is seen again on a 1925 map, but the use is not identified.

7. This 1905 Bank of Caswell apparently was the second bank of that name to operate in Milton:

"In 1871, a new bank was chartered, the Bank of Caswell, which was located at Milton, Caswell County, North Carolina. It was directed by "commissioners" John B. Blackwell, George Williamson, James Poteat, Thomas D. Johnston, and Thomas Bigelow. How long this Bank of Caswell operated is not known. However, it apparently ceased business before 1905." 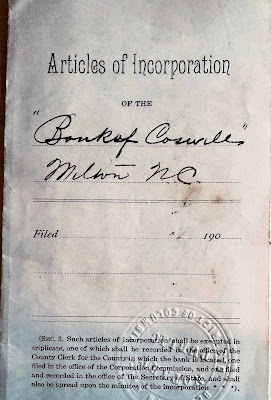 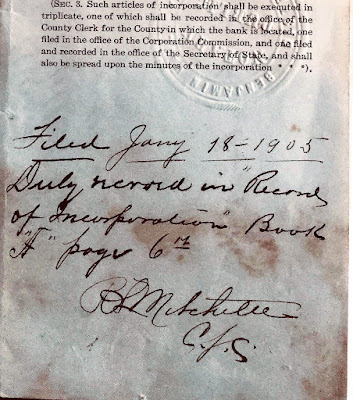 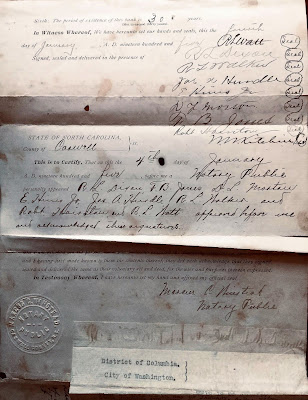 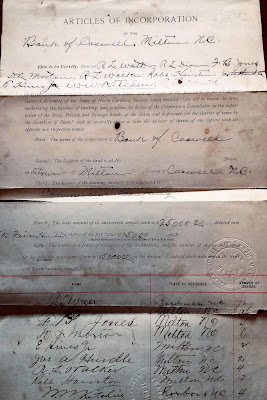 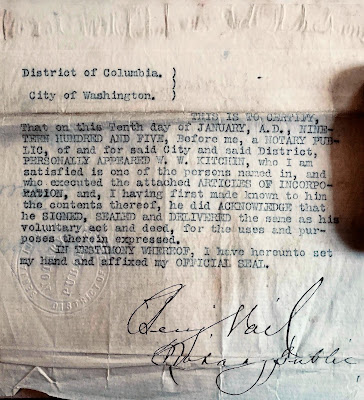