In the background of this 1939 photograph is the Upchurch Building (just to the right of the tall Yanceyville Drug sign).

Not discernible in this low-resolution photograph is the window of the store that operated on the first floor of this building. The script is: "F. T. Whitfield." This is Franklin Thomas Whitfield (1894-1950). When F. T. Whitfield opened the store is not known. In the early 1940s he sold the business to Clyde Banks Rogers (1900-1980), discussed below.

However, there was an earlier store operating on the first floor of the Upchurch Building (east side of the Square in Yanceyville, Caswell County, North Carolina). This was Dodson & Hunter. 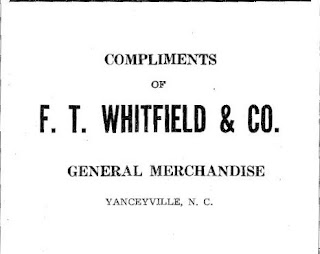 When Dodson & Hunter sold the business is not known. However, as shown above, in 1939 the proprietor was W. T. Whitfield. And, this advertisement is from 1941. Thus, it was in or after 1941 that W. T. Whitfield sold to Clyde Banks Rogers.


In this photograph, Clyde Banks Rogers and son are standing in front of his Yanceyville store: C. B. Rogers Genl. Mdse. (C. B. Rogers General Merchandise). 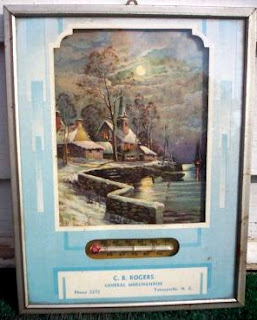