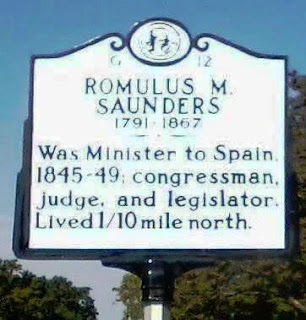 Romulus M Saunders acted as a public official from the age of 24 until his death at 76. Saunders was born in 1791 in Caswell County, but moved to Tennessee at an early age after the death of his mother. When his father died in 1803, Saunders returned to Caswell County and continued his education at Caswell and Hyco academies until he enrolled at the University of North Carolina in 1809. When Saunders was expelled from the University in 1810 for firing a pistol and throwing a stone at a professor, he returned to Tennessee to study law, becoming licensed in 1812. After joining the bar, Saunders returned to Milton and entered politics as member of the House of Commons in 1815.

Saunders joined the State Senate in 1816, but returned to the House of Commons in 1818, where he was elected Speaker in 1819 and 1820. Saunders then was elected to the United States Congress in 1821, serving two terms until 1827. He acted as the North Carolina attorney general between 1828 and 1831, although he officially held the post until 1834, at which time the office was declared vacant because Saunders was actively holding an alternate position, which violated the North Carolina law against dual office holding. In 1833, while still technically attorney general, Saunders joined the commission on French spoliation claims, stemming from the French seizure of American ships in the early nineteenth century. Saunders’ involvement in the commission gave him a national reputation, but he returned to North Carolina in 1835 to join the bench of the North Carolina Superior Court.

Saunders served as a justice for the North Carolina Superior Court between 1835 and 1840 and again between 1852 and 1867. In between, he ran for both North Carolina governor and U.S. Senator, twice, and was defeated in each election. Saunders retained a significant position nationally, partially through his sponsorship of a resolution in the Democratic National Convention in 1844 that a two-thirds majority be necessary for a political candidate to be supported by the Party. The resolution helped North Carolinian James K. Polk defeat Martin Van Buren. In 1846, Polk appointed Saunders as minister to Spain, a post Saunders held until 1849. While serving as minister, Saunders tried to purchase Cuba from Spain, but was unsuccessful in his bids. After his resignation, Saunders returned to Raleigh, rejoining the Superior Court bench in 1852.

Saunders resided in Raleigh from 1831, but spent his early adulthood in Caswell County. From his move to Raleigh in 1831 until his death in 1867, Saunders lived at “Elmwood”, built in 1813 for Chief Justice John Louis Taylor. Saunders was one of North Carolina’s most prominent political figures in the nineteenth century, and was best known for his fierce partisanship and long political tenure.