Albert E. Casey, one of the pioneers of modern pathology in the state of Alabama, died on December 26, 1982, in his 79th year. He suffered a severe stroke several months prior, from which he never fully recovered.

Albert Casey was born in New York City in 1903, son of Eugene Joseph Casey and Anna Alma Powell. This heritage of Irish and deed Southern blood later was to inspire him to publish voluminous works, 16 in all, on family-related history in County Cork, Ireland, and Amite County, Mississippi. While the ancient records of the homes of his ancestors delighted him, he also was to apply modern anthropological techniques to the problems of human migrations throughout the globe. 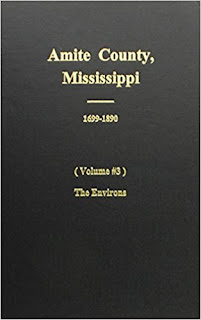 The present or third Volume contains marriages, military records, estate papers and genealogies. The marriages are from Amite County 1820-38 (Vol. 2A) and 1867-90 and from the adjoining Louisiana Parishes of St. Helena and East Feliciana, and in the adjoining Mississippi Counties of Wilkinson, Franklin and Pike; also . . . .

The following has not been confirmed and is placed here for research purposes only.