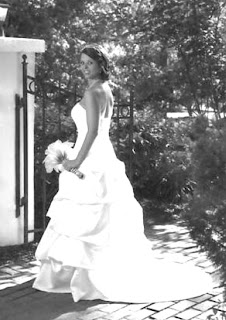 Emily Ann Williamson and Michael Stephen Reagan were united in marriage on Saturday, September 18, 2010 at 4:00 p.m. at Bethesda Presbyterian Church of Ruffin, N.C. The bride is the daughter of Mr. and Mrs. George Williamson of Reidsville, N.C. She is the granddaughter of Richard King and the late Billie King of Yanceyville, N.C., and Geneva Williamson and the late Lynn Williamson of Reidsville, N.C. The groom is the son of Mr. and Mrs. Ray Reagan of Reidsville, N.C. He is the grandson of Mr. and Mrs. William Reagan of Ruffin, N.C. and Kenneth Eckles and the late Ann Eckles of Greensboro, N.C. He is the great-grandson of Mary Lou Harrelson of Danville, Va. The ceremony was officiated by Reverend Mac McDowell and scripture was read by Reverend Joseph McDonald. The bride was escorted by her father and given in marriage by her parents. Music was presented by Pianist Mrs. Connie Kimrey and by Soloist Mrs. Suzanne Blackwell. Mrs. Pat Dail, aunt of the bride, directed the wedding. Flowers were provided by Mrs. Betsy Jones. Miss Sally Williamson, sister of the bride, was the maid of honor. Bridesmaids were Miss Michelle Reagan, sister of the groom, Miss Sarah Burton, Miss Laura Beasley and Miss Stephany Emory, friends of the bride.

Honorary bridesmaids and program attendants were Miss Megan Heath and Miss Morgan Heath, cousins of the bride. Also serving as honorary bridesmaids and guest registrars were Miss Jill Watlington and Miss Katie Aldridge, friends of the bride. Flower girls were Miss Katie Williamson and Miss Sophia Clowney, cousins of the bride. Mr. Ray Reagan, father of the groom, served as best man. Groomsmen were Mr. Jordan Williams, Mr. Jason Cobb and Mr. Jordan Hodges, friends of the groom. The ring bearer was Master Josh Eckles, cousin of the groom. Mr. Pat Bullock of Sterling Images was the photographer and Ingrid and Dale McCraw of Blue Emerald Productions were the videographers. A reception immediately followed the ceremony at Tuscany Gardens of Browns Summit, N.C. Music was provided by D. J. Keith Henderson of Burlington, N.C. On Friday evening a rehearsal dinner was hosted by the groom’s parents, at Alamance Country Club in Burlington, N.C. The groom is employed by Caswell County ABC Board and the bride is employed by Caswell County Schools.