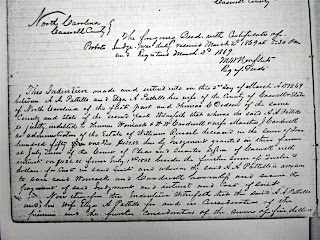 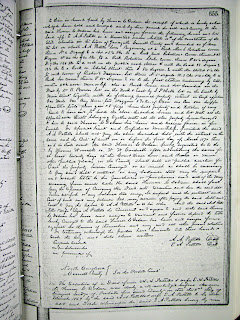 Note that the following transcription has been adjusted (paraphrased in parts) to make more readable by today's researcher. The essence has been retained. A. A. Pattillo apparently was sued by William Russell (or the executors of his estate) in Caswell County. William Russell (or his executors) apparently prevailed, and judgment was entered for $451.82 in the July 1868 term of the Caswell County Court of Pleas and Quarter Sessions. The executors of the William Russell estate were: Thomas Womack, W. W. Cardwell, and Martha J. Cardwell.

Martha J. Cardwell is Martha Jane Womack, the third wife of William Russell. Pursuant to a Caswell County marriage bond dated 7 January 1868 she married William W. Cardwell. The Thomas Womack also named as an executor is believed to be Thomas Jefferson Womack, brother of Martha Jane Womack Russell Cardwell, but this has not been confirmed.

The document is a deed of trust. To prevent an immediate levy upon his property, A. A. Pattillo conveyed to trustee Thomas C. Dodson sufficient property to satisfy the judgment. This probably required the agreement of the executors.
_______________

This indenture made and entered into on this 2nd day of March AD 1869 between A. A. Pattillo and Eliza A. Pattillo, his wife of the County of Caswell and State of North Carolina of the first part, and Thomas C. Dodson of the same county and state of the second part.

Witnesseth that, whereas the said A. A. Pattillo is justly indebted to Thomas Womack and W. W. Cardwell and wife Martha J. Cardwell, as administrators of the estate of William Russell, deceased, in the sum of four hundred fifty one 82/100 ($451.82) due by judgment granted in their favor at July Term of the Court of Pleas and Quarter Sessions of Caswell, with interest on $425.05 from July 1st, 1868, and the further sum of twelve 32/100s dollars for costs in said suit.

And, whereas the said A. A. Pattillo is anxious to save said Womack and Cardwell harmless from said judgment and interest and cost of suit.

Witnesseth that, the said A. A. Pattillo and his wife Eliza A. Pattillo for and in consideration of the presents [or premises] and the further consideration of the sum of five dollars to them in hand paid by Thomas C. Dodson, the receipt of which is hereby acknowledged, have sold and conveyed and by these presents do sell and convey to the said Thomas C. Dodson, his heirs and assigns forever, the following houses and lots laid off to A. A. Pattillo as a homestead under Article 10th of the Constitution of the State, situated in the Town of Yanceyville, Caswell County, and bounded as follows:

Also, a brick house and lot bounded on the west by Dr. B. Brown's lot, on the north and east by S_______'s lot, on the south by Main Street, together with the following personal property: interest in crop of tobacco, one mule, one bay horse, two wagons, one yoke of oxen, one cow, one heifer, plantation tools, flour _____, eight pigs, household property, and kitchen of every kind

To have and to hold the above-described houses and lot with all the appurtenances thereto belonging together with all the _____ property herein, convey it to him, the said Thomas C. Dodson, his heirs and assigns forever in fee simple.

In official trust and confidence __________ furnished, [should] the said A. A. Pattillo not pay the above described debt, with the interest on the same and cost of suit on or before the first day of March 1870 , and then in that event, the said Thomas C. Dodson, being requested so to do by Thomas Womack or W. W. Cardwell, after advertising the same for at least twenty days at the Court House door and _______ or more other public places in the County, shall sell at public auction for cash the property herein conveyed or as much as shall be necessary to pay said debt and interest, or any balance that may be unpaid and execute title to the purchaser or purchasers.

In testimony whereof, the grantors have hereunto set their hands and seals the day and date above written:

Permalink
Posted by RSF at 5:36 PM